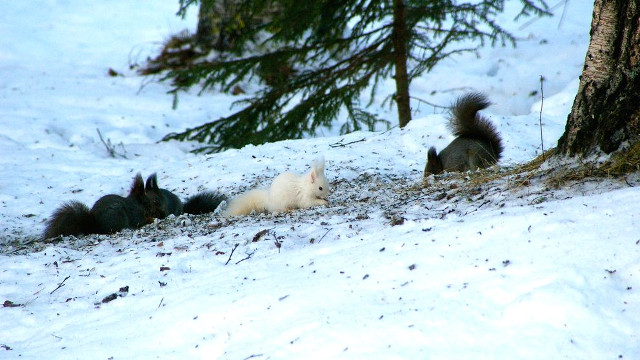 Staffan Åström from Aspås first saw the squirrel in December, and it has been coming to his house ever since.

“I thought it was quite special the first time I saw it. It has been coming since December until now, and I saw it yesterday,” Åström told The Local.

The squirrel isn't albino – the lack of red eyes makes that clear according to Åström.

“It's not albino, there's something in its DNA that makes it white. It comes over to the bird food table and eats the sunflower seeds we leave out.”

As unique as the squirrel is, it'll have a tough time reaching the level of fame achieved by another unusual white animal in Sweden. Last year a white elk caught on camera in Värmland, western Sweden went viral on an international level.

The fame brought an inevitable surge in elk-spotters hoping to catch a glimpse of the local celebrity. In November it almost met an untimely end after a decision was taken to shoot the animal when a woman reported being charged by it while walking her dogs, but a petition signed by more than 50,000 people in 24 hours meant the decision was revoked.