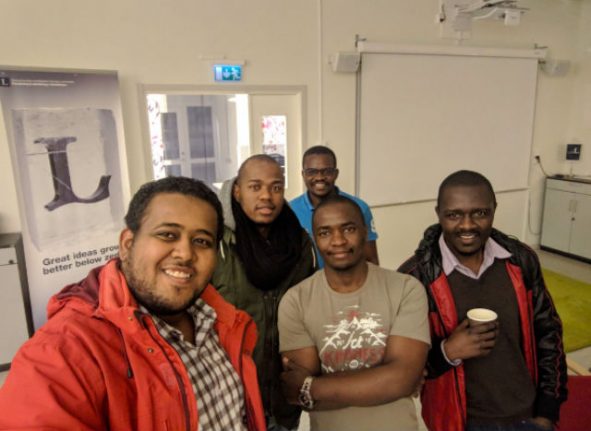 Coming from Uganda, the weather in Sweden’s far north came as something of a shock to Andrew Willy Kedi when he first arrived. He’d barely had time to unpack before receiving a welcome email from Luleå University announcing the arrival of the year’s first snow.

“I’d never lived anywhere where the temperature fell below zero degrees!” he says. “When I arrived at Luleå, I quickly purchased warm clothing in the first weeks of arrival.”

With an average temperature of -10.6°C in January, and often just four hours of daylight in winter, Luleå can be a challenge to adapt to, particularly when you hail from a country with a substantially warmer climate.

But the weather wasn’t what drew Andrew to study for his master’s in Information Security at Luleå University. It was the diversity of the international students and the once in a lifetime opportunity to study alongside them.

“This kind of multiculturalism in a study environment supports the communal exchange of knowledge and learning,” he explains.

When he heard about the NFGL Local Network at Luleå University — which is also comprised of students from the Skellefteå campus — he jumped at the chance to join.

“Local networks provide a lot of possibilities to students who want to go onto leadership positions. All members of Local Networks are scholarship holders and this alone is an opportunity to be part of a large group of people that share common goals and interests.”

Being part of the network, he says, has allowed him to appreciate the initiative of others and enjoy working as part of a team. As the semesters are fairly short, he has also learned to value the activities which fall within the period.

“We are organising a field trip to Volvo Cars in Gothenburg about 1,400 kilometres from Luleå. Volvo is one of the leading car manufacturers currently working on mass production of electric cars. I hope this trip will really benefit our engineering students who will gain insights into manufacturing, automation, and research.”

He adds that the network is also planning to venture even further north than Luleå, when they will visit the Kiruna Mine in Lapland, the world’s largest and most modern iron ore mine.

Andrew encourages his fellow first-year students who are on two-year courses to join their Local Network so they can help next year’s network members organise events, with the hope they get as much out of it as he has.

“It will enable new students who join the following year to share ideas with students who had been part of the network the year before,” he says.

“I’m grateful to the Swedish Institute for funding our activities, as well as other NFGL networks from different universities across Sweden, for the effort they put in outside of their academic work to make our study time more appealing.”