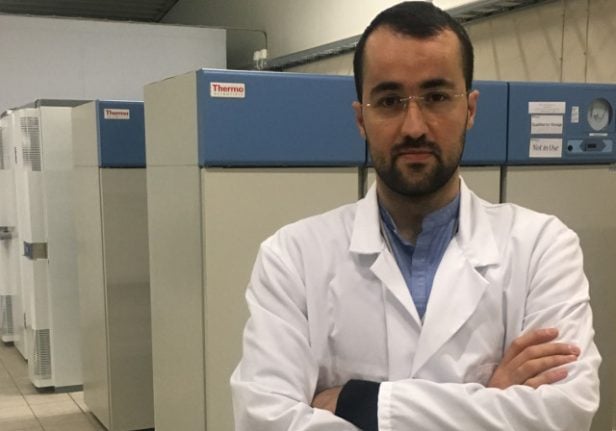 Hussein Ismail came to Sweden from Lebanon in 2014 to continue his work with Birka Biostorage, which he co-founded remotely in 2011.

“In the beginning, I was helping from abroad until we reached a point where I needed to join physically because of the demands of the job, that's why I moved. We started expanding then, until we reached the situation we’re in today,” Ismail explained.

“I've also been involved in three other start-ups in Lund, of which I’m a co-founder and part owner.”

Last week the company celebrated expansion plans to grow “ten times bigger” than it currently is, including moving to a new location in Lund's Science Village.

But in order to reach that point, sacrifices had to be made. During a period of economic turbulence in 2015, Ismail decided to give up some of his pay in order to get his firm through the rough patch. The decision worked in the long term, allowing Birka Biostorage to survive and grow to where it is now.

Ismail has now been told by the Swedish Migration Agency that the pay cut meant he was in breach of the minimum salary stipulated in his collective employment agreement, and as a result will not be allowed to extend his work permit.

Because of this, he has been issued with a deportation order, meaning he has to leave Sweden in four weeks.

“We agreed that as we were going through a tough time economically in the start-up, we needed to make sacrifices in order to keep going and survive,” the entrepreneur explained.

IN DEPTH: Why is Sweden deporting its foreign professionals?

Sweden's strict rules in the area are designed to stop workers being exploited, but Ismail pointed out that he was in no way forced into his decision, and that it was simply a conscious choice by a young company to sacrifice in the short term for long-term gain.

“No one wants to drop their own wages unless they have a good reason to sacrifice, in order to build up the start-up and continue expansion. If we hadn’t done that at that time, we wouldn’t be in the position we are in now, with the plans we have.”

When contacted by The Local, Sweden's Migration agency said the law provides no room for manoeuvre.

“We fully understand that it may seem harsh. But the law as it is designed today does not provide space for people with an employee’s residence permit to consciously waive legally defined requirements,” Migration Agency press spokesperson Alexandra Elias explained.

Ismail is preparing an appeal along with a lawyer which he hopes to launch next week.

“Mistakes happen, all over the world. The most important thing is how you fix them. That’s what we’re thinking about and planning around starting next week,” he concluded.