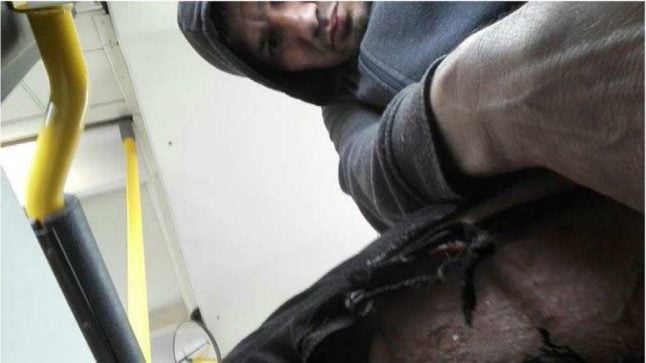 Stockholm attacker Rahmat Akilov sent pictures of his burnt trousers to a contact as he fled the scene. Photo: Police
According to the official appraisal of Säpo’s handling of the case led by Runar Viksten, lead judge of Sweden’s military intelligence court, Säpo began monitoring Akilov on August 31st 2016, after receiving intelligence that suggested he might be a risk.
It then broke off the assignment on January 19th — exactly the same time killer began planning his attack.
However, Viksten said that he had nonetheless concluded that Säpo’s decision had been justified by the intelligence they had at that time.
“The intelligence which existed was not in my judgement sufficiently concrete to provide grounds for the use of, for example, preventative force,” he wrote in the report, according to the Aftonbladet newspaper.
“The conclusion of my appraisal of Säpo’s actions with regard to the information which had come in about Akilov is that Säpo did what was possible.”
According to Viksten the sort of social media chats which alerted them to Akilov, expressed ideas that are not uncommon.
“The information which came into Säpo was based on social media chats which revolved around potential possibilities for a terror attack and not around any concrete plans,” he wrote.
“One must remember that it is not uncommon for people on social media and chats connected to militant Islamism to propose exalted throught and plans for attacks in order to boost their statuses.”
Viksten concludes his appraisal, which was ordered by Sweden’s civil service, by arguing that Säpo had shown itself to “a well-functioning organisation” in its handling of Akilov.
READ ALSO: All of The Local's articles about the Stockholm truck attack