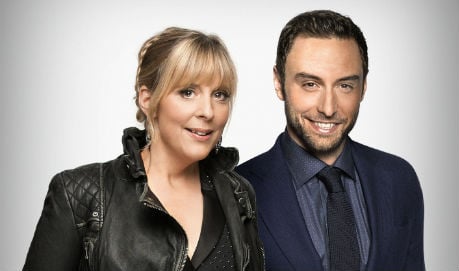 Is Mel and Måns the new Mel and Sue? Photo: BBC
The  2015 Eurovision winner will on Wednesday night present Eurovision: You Decide from the Brighton Dome, in his first ever appearance as a presenter on British television.
The 'Heroes' singer told Sweden's Expressen newspaper that he was convinced Brits could one day be as obsessive about Eurovision as the Swedes, and even start sending contestants with a chance of winning.
“I dream of being a part of this in the future, and trying to help develop the competition so that it becomes more of a Melodifestivalen sort of thing,” he said.
“In Sweden people talk pretty much constantly about Melodifestivalen, and I think that can happen here too.”
Zelmerlöw's co-presenter Mel Giedroyc was part of the presenting duo who launched Great British Bake Off (together with Sue Perkins), a cooking competition which achieved the unlikely feat of turning pastry making and patisserie into a national obsession. Zelmerlöw said the two had built up a good rapport.
“We work fantastically well together,” he said. “Our sense of humour is very similar to the English one. We are extremely sarcastic and ironic.”
While the UK has for decades treated Eurovision as beneath the country's dignity, Swedes have perfected finding the fine line between taking the competition seriously and having a sense of humour about it.
But the main difference between presenting in the UK and in Sweden, said Zelmerlöw, was that in the UK the Royals were off limits.
“Some jokes about the Royals have gone,” he said. “Royalty is very sacred in England: you can't really joke about them any way you want.”
Eurovision: You Decide marks the second time the BBC has allowed viewers a say in who the UK sends to the contest, following a successful model long followed in Norway and Sweden.
Zelmerlöw, who has co-presented both Sweden's Melodifestivalen contest and the main Eurovision event, was approached by the BBC last year.
“They loved the Eurovision which we did,” he said. “It feels like I want to work here and build up a career here too.”
Zelmerlöw moved to London last year and says he hopes to use Wednesday to launch a career as a UK presenter, side-by-side with his Swedish pop career.
However, he noted that the BBC production was still much lower budget than the lavish spectaculars he has fronted in Sweden.
“There's no luxury at all surrounding this programme,” he said. “You notice that there isn't exactly a giant budget, but that's something I hope can be changed.”