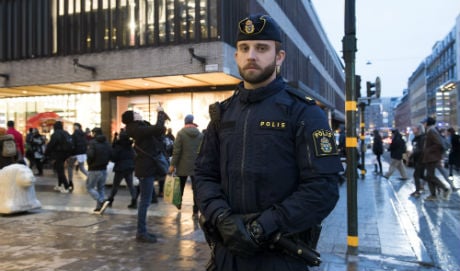 Robert Löfving shares the 112 award for best emergency response. Photo: Henrik Montgomery/TT
Along with a colleague, he sprinted through the smoke into the Åhléns department store, pistol at the ready, in pursuit of the perpetrator.
Löfving got the alarm just before 3pm, as he and colleagues were about to finish their early shift at Norrmalm Police Station, a seven-minute drive from the scene.
“All we heard was that a truck had driven over some people,” he told TT. “We didn't know how concrete the information was, but the whole squad leapt up and started running to their cars.”
Minutes later he and his colleague were at Adolf Fredriks Krykogata where the self-confessed terrorist Rakhmat Akilov had stolen a truck.
“We got out of the car and were met by screaming people who were running towards us in a panic,” Löfving said.
They ran in the opposite direction, shouting to panicking shoppers that they should leave the area, and passing paramedics performing CPR on victims.
“We ran past all these wounded and dead people and that hit me hard. Saving lives comes first in all the jobs we do, apart from events like this,” he says. “People who carry out terror attacks are usually so motivated that they don't end the attack until they are actually stopped. So if we had stopped and helped, more would die.”
READ ALSO: The Local's coverage of the Stockholm April 7th attack
After a few blocks, Löfving came across a speed barrier, a concrete lion, which had been thrown in the air and smashed through a window.
“That's the first time I understood how fast this had happened, the sort of force it had involved.”
At Åhléns, he saw the truck smashed into the building and on fire. The store was full of smoke, the sprinkler system was covering the floor with water, and the alarm was ringing.
Löfving and his colleagues had been in such a rush to get to the scene that they had left their gas masks, bullet-proof vests and helmets behind, but they nonetheless drew their weapons and entered the store, telling ambulance personnel to pull them to safety if the smoke made them pass out.
“At that point we had no idea how many were involved, but we were treating it as a terror attack. We were sure that there were going to be explosions, that people would be stabbed, and that people would end up getting shot.”
After hours hunting around the department store in the smoke, however, all they found were their colleagues.
That evening Rakhmat Akilov was arrested in Märsta, a suburb north of Stockholm, but it wasn't until midnight that Löfving was told he could go home and get some rest.
Löfving and the rest of the police, ambulance personnel, firemen and women, hospital staff and alarm operators, have now been awarded the 112 prize for the best emergency response of 2017. Akilov's trial begins next week on February 13th.
When Robert Löfving was leaving Drottninggatan the evening after the attack to go back and get his police car, he went along the same road he had run down just a few hours before.
It was only then that the images started to flash before his eyes: that thing was lying there, that person was lying there. In the moment, he had suppressed everything.
“For me it's hard to comprehend how there weren't many more people killed,” he said.