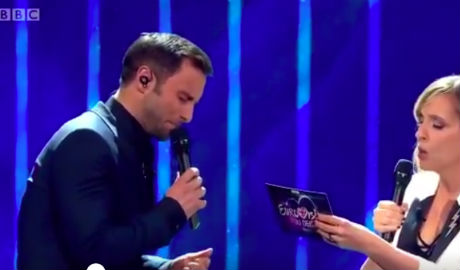 After months living in London, Måns Zelmerlöw passed his Britishness test with flying colours. Photo: Screen grab/BBC
The 2015 Eurovision winner began with a duo version of Abba's Waterloo, before causing a stir – and making some headlines – with close-to-the-bone gags about Brexit and Prime Minister Theresa May.
“Can we please get more of Mans Zelmerlow on British TV? Pretty please? I'm in love with him,” tweeted one viewer, while another called for a petition for him to present more shows.

Can we please get more of Mans Zelmerlow on British TV? Pretty please? I'm in love with him.

Seriously we definitely need to see @manszelmerlow on UK TV more often, he was a brilliant co-host tonight & loved the banter with Mel….plus he did it all in a language that isn't his first language! Congratulations Mans! #EurovisionYouDecide

Newspaper reviews commended Zelmerlöw and his co-host Mel Giedroyc for pulling off an enjoyable show.
“The hour-and-a-half show was pacy and funny, with Mel Giedroyc and Måns Zelmerlöw showing real chemistry as hosts,” wrote the Daily Telegraph.
“Mans doing a Britishness test actually made me laugh. He can stay,” agreed The Guardian's live blogger. “Love him or hate him, you can't deny he rocks a turtleneck.”
But it was the arch-Eurosceptic tabloid, Daily Express, which turned Zelmerlöw's gags into an actual news story, describing his Brexit joke as “a shock swipe at Remoaners” (those who regret Britain's vote to leave the European Union).

The gag came as he and his co-host told viewers how to vote for the song they wanted to go through to the Eurovision contest in Lisbon.
“And remember you have to vote. If you don't vote you're not allowed to complain about the results afterwards,” Zelmerlöw said before coughing the word “Brexit” into the crook of his elbow.
There was also much glee at Zelmerlöw's description of Prime Minister Theresa May's hair as “fluffy” during the Britishness test administered by Giedroyc, the presenter best known for co-presenting the Great British Bake Off.
Giedroyc began with the strangely named sausage-in-batter British specialty. “What's a ‘toad in the hole',” she asked. “Sausages and Yorkshire pudding,” Zelmerlöw replied.
“How would you describe Theresa May's hairdo,” she went on. “Fluffy,” he responded.

How would you describe Theresa May's hairdo?
Fluffy!#EurovisionYouDecide
Nearly spilled the wine I laughed so hard.

“In what ways are the French superior to us,” Giedroyc then asked. “None,” Zelmerlöw answered correctly.
“When will Donald Trump visit the UK,” she continued. “Never,” came his response.
“You're British, well done,” Giedroyc concluded.
Perhaps surprisingly, the Britishness routine was scripted by two other Swedes, Edward af Sillén and Daniel Réhn.
Af Zillen, who works as a director at Stockholm's National Theatre, lapped up the appreciation, retweeting the comments his gags got, particularly from Eurovision fanastics, who tend to despair at the BBC's historic refusal to take their contest seriously.

This has @EdwardafSillen written all over it. Mixes that right mix of British and (very similar) Swedish humour #eurovisionyoudecide

One of the main successes of @EdwardafSillen and Daniel Réhn's scripting has been to take the nasty snarkiness out of #EurovisionYouDecide. The show has felt so positive this year.

Viewers voted for Storm, a dance pop anthem by the singer SuRie, to represent the UK in Lisbon, a choice the Daily Telegraph concluded might mark the first time the UK actually seemed to be playing to win.
“The uplifting number is all about chasing rainbows and holding hands together through hard times, which is very Eurovision indeed,” the paper concluded.
“If we want to win, it's a much more promising offering than some of our previous entries.”
Perhaps Zelmerlöw might actually succeed in his mission to teach Brits to do Eurovision the Swedish way.
Here is is performing Waterloo: