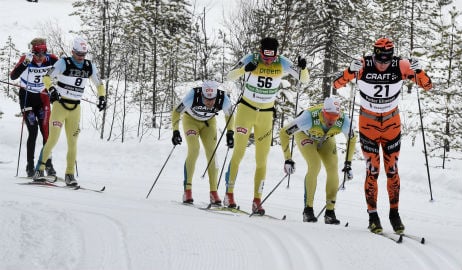 Competitors in 2017's Vasaloppet race had to make do with artificial snow over much of the course. Photo: Ulf Palm/TT
Heavy snowfall in central Sweden over the last month has left snow well over a metre deep along much of the 90km course, with 80cm of packed snow on the track.
“It's the most snow since 1988,” Tommy Höglund, one of the race's organizers, told The Local. “I think about 60cm of natural snow would be best for both skiing and clearing the parking areas – and now we have almost double that in some places.”
This year's heavy snowfall follows three straight years in which snow shortages have forced the organizers to use artificial snow to cover parts of the track. Back in 2007, they built a snow factory in Oxberg, near Mora, to ensure that the race can continue to go ahead despite the warming climate.
Höglund said that whether this year's surfeit of natural snow would improve conditions for the 97,411 participants depended very much on how cold it would be the night before the March 4th start.
“It will be a very nice race with a lot of snow on the ground,” he said. “But with artificial snow you always have hard and icy tracks, with natural snow it's more smooth and soft, but the track can become slippery and bad after 5,000 skiers, but this depends on the night before. If it's cold, everything will be fine.”
Höglund said he expected snowy years like this one to become increasingly rare.
“I'm quite sure that this year is an exception from the warmer years of global warming,” he said. “We're lucky to have this year now. In the future we will have less and less snow.”
He said the main problem with deep snow was that it created extra work clearing space for the competitors to park their cars and rest by the sides of the track.
“For the skiing course, it's not a problem at all.”
READ ALSO: Frozen Sweden's 24 hours of ice