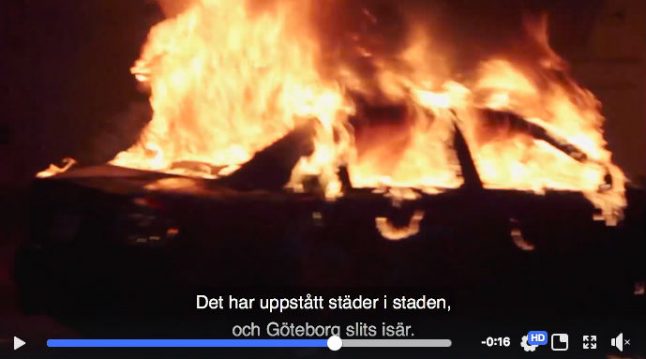 A screengrab of the video. Photo: Nya Moderaterna

The video (see below) begins by explaining how Sweden's second biggest city was once a dynamic and enterprising place. But the city has since, according to the party's video, become a hotbed for criminals.

The video cuts suddenly to a clip of car enveloped by a raging fire.

The film comes amid debate in Sweden about crime and a spate of car torchings, but the choice of footage was criticized after it emerged that the burning car was actually recorded in Canada, not Gothenburg.

The origin of the car fire clip was revealed after an investigation by P3 Nyheter, which pointed out that the footage of the burning car was taken after Vancouver lost a professional ice hockey match in 2011.

Ann-Sofie Hermansson of Social Democrats, and the mayor of the Gothenburg Municipality, was quick to slam the film.

“I think it's painting the city in a bad light and populism – mixed together in a very uncomfortable way,” she told Sveriges Radio.

The man behind the film, Moderate candidate David Josefsson, brushed aside the criticism after admitting he took the footage from a public domain.

“Just because the footage is from Canada doesn't mean that the problem isn't in Gothenburg,” he told the channel.

Concerns have previously been raised about crime and car torchings in parts of Gothenburg, although violent crime fell in the city in 2017 compared to the year before, according to official crime statistics.

This is not the first time a stock image taken elsewhere is used to illustrate crime in Sweden. Last year Siv Jensen, the leader of Norwegian Fremskrittspartiet, shared a picture of a car on fire in Bulgarian capital Sofia with the tagline “We don't want the Swedish condition in Norway”.