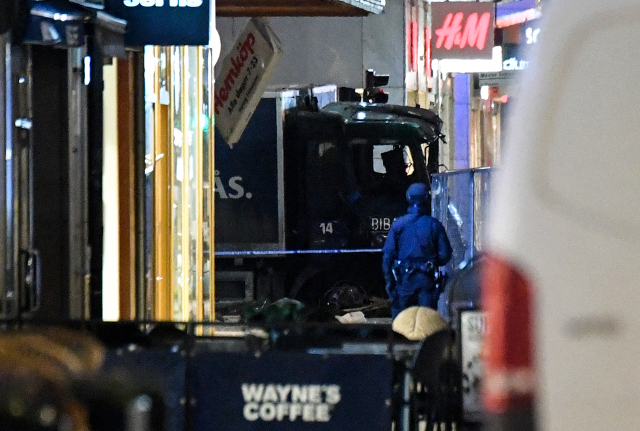 The truck used in the attack. Photo: Maja Suslin/TT

Akilov, whose Swedish asylum application had been rejected in 2016, had sworn allegiance to Isis on the eve of his assault in one of Europe's safest cities, though the jihadist group never claimed responsibility.

On the afternoon of Friday, April 7th, Akilov stole a beer delivery truck and barrelled down a bustling pedestrian shopping street, swerving wildly to hit as many people as possible.

Three Swedes were killed, including an 11-year-old girl, as well as a 41-year-old British man and a 31-year-old Belgian woman. Ten others were physically injured.

Rakhmat “Akilov took the truck … and drove it … He killed five people and physically injured ten,” his lawyer Johan Eriksson told the court adding: “The lives of a large number of people were put in danger.”

“The motive was to instigate fear and to get Sweden to end its participation in the coalition against the Islamic State,” Eriksson added.

Non-Nato member Sweden has around 70 military personnel based mainly in northern Iraq to provide training as part of the US-led coalition against Isis.

Akilov, who turns 40 on Wednesday, ended his rampage by crashing the truck into the facade of a department store and detonating an explosive device – made up of five gas canisters and nails – though it didn't explode as planned and caused damage only to the truck.

He told investigators he had planned to die in the assault.

Akilov fled the scene by running into nearby metro station T-centralen, and was arrested several hours later thanks to public transport video surveillance images.

He confessed in police questioning

The prosecution showed the court amateur videos filmed just after the attack, showing panicked passersby and a body lying on the ground.

In an adjoining room, some observers watching the proceedings on a screen, including relatives of victims and survivors, sobbed and held hands.

Investigators have recovered several smartphone exchanges Akilov had with unidentified contacts on encrypted chat sites before, during and after the attack.

During Tuesday's proceednigs, the prosecution presented a list of his conversations on WhatsApp, Telegram, Facebook and Zello, found on his phone.

Of 209 messages, 16 are “interesting”, according to prosecutor Hans Ihrman, in particular those on a Zello chat forum where Akilov spoke to contacts using the pseudonyms Muovia Regari, Abu Aisha, Muhammad, and Abu Fotima among others.

To one of his contacts, Akilov wrote on January 19th, 2017: “I'm working and saving money and God willing I will carry out the martyr operation.”

Akilov also wrote a list of potential targets to one of his contacts, including a synagogue, a ferry transporting “sinners” and a nightclub, adding: “There are plenty of infidels here.”

On February 12th, he also googled “gay club in Stockholm“.

While investigators continue to search for Akilov's contacts, investigators believe he acted alone and have therefore charged only him.

Prosecutor have said they will seek a life sentence and, thereafter, his expulsion from the Scandinavian country. A life sentence in Sweden varies, but is on average 16 years.

Eriksson told the court his client would not oppose deportation.

Akilov arrived in Sweden in 2014, at the start of the big migration wave to Europe. His application to remain in the country was rejected in 2016, after which he went underground to avoid expulsion and worked odd jobs in construction.

Akilov's wife and four children had stayed behind in Uzbekistan.

Europe has seen a wave of truck attacks in recent years. The deadliest was in Nice, on July 14th, 2016, when a truck rammed crowds leaving a fireworks display for France's national holiday, killing 86 people.

The Scandinavian country has experienced only one other terror attack in modern times. In December 2010, a man blew himself up in a suicide attack in central Stockholm that lightly injured two passersby.