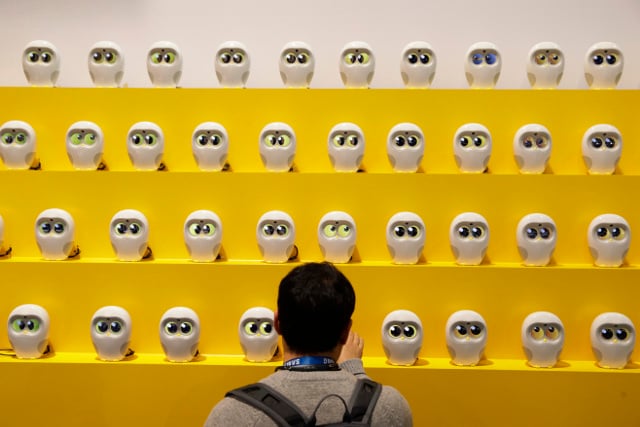 Robots: not so good at emotion. Photo: Jae C Hong/AP

The Substitution of Labor report by four researchers from the Stockholm School of Economics looks at how feasible it is for jobs to become automated in the future, and its conclusions suggest that the idea we're all about to be replaced by hordes of cheaper more reliable robots at work is wide of the mark.

There are still significant technical challenges to automation in multiple areas, the paper notes. So while machines are better at quickly retrieving information from databases than humans are for example, they still struggle to create something new, with human creative intelligence giving us an advantage in that regard.

“Creative intelligence is the key – and that is currently one of the most difficult capabilities to automate. To be creative one must be able to make new combinations of familiar concepts, which requires a rich body of knowledge,” the paper explains, adding that computers lack the common knowledge humans have built up over their lifespan.

When it comes to the delicate area of sensory perception they also struggle: judging how much force to use when grabbing an object and estimating the object's position when it's out of sight of a camera is a tough ask. So too is nuanced hearing, like for example distinguishing individual voices and accurately recording their information in noisy scenarios like a restaurant (waiters and waitresses, breathe a sigh of relief).

And the least advanced area of all is, perhaps unsurprisingly, social and emotional capabilities, in which the paper estimates machines will “probably not surpass human level for at least two more decades”. The overall result is that while machines are well equipped to perform non-nuanced tasks like packing items in a warehouse (and as a result are already doing so at automated warehouses), they do not have the capacity to perform a number nuanced tasks that require situational adaptability in unpredictable environments.

The easy-to-understand example the paper gives is walking a patient down a hospital hallway. That tasks requires helping the patient to get out of bed by communicating based on the patient's emotional state, then requires fine-tuned motor skills with sensory perception to hold the patient using the correct force, then navigate with them. A seemingly simple task for a human, but one that requires our emotional and sensory perception – big problems for a robot.

“Detecting and generating nuances is definitely an area where technology is currently still struggling. It is, for example, very difficult for machines to detect sarcasm or to grasp and manipulate small, de-formable objects,” Jochem van der Zande, one of the authors of the report, told The Local.

“The overall automation potential is also largely influenced by the fact that it is still difficult for machines to perform non-routine tasks (dealing with new environments or unexpected events) and to integrate multiple capabilities into well-functioning, holistic solutions.”

The routine vs non-routine distinction also applies to cognitive tasks. A machine can do your bookkeeping better than you can – capacity in these areas has been “brought to an unprecedented scope and pace” according to the paper – but they struggle with non-routine cognitive tasks requiring creativity or reasoning, like for example teaching or negotiating.

The potential for automation can vary by country, the researchers judge. In the case of Sweden the percentage of jobs at high risk of being substituted (seven) is lower than the OECD average (nine) because of its strong focus on high-skilled employees who perform fewer automatable tasks.

Rather than mass job losses, what the research shows is more likely is that machines will take over specific mundane tasks in the workplace while humans focus more on complementary tasks where they hold an advantage, thanks to their creative and interactive abilities.

“In our research, we found that technology advancement will likely not result in mass-unemployment, but will rather lead to more intense collaboration between humans and machines and will change the focus of human labour. However, to enable this, we will need to be rightly educated and trained. So that should be an area of focus for the government and the private sector,” Van der Zande concluded.