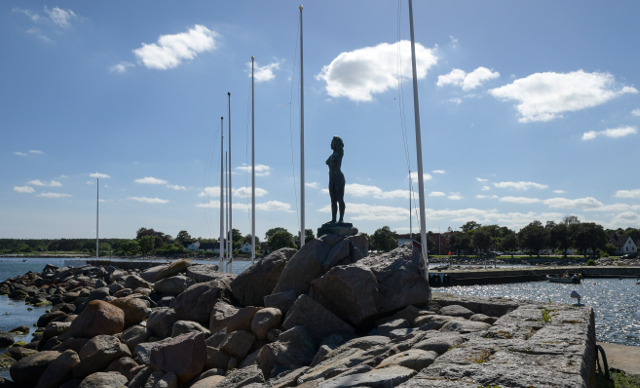 Welcome to the village that went straight from autumn to spring this year. Photo: Johan Nilsson/TT

Meteorologists in Sweden consider spring to have arrived when the daily average temperature tops zero degrees Celsius for seven consecutive days at any point after the official cut-off date of February 15th.

In much of the country this process is often painfully slow, but not in southern Sweden, which saw the return of spring exactly a week ago.

In fact, the fishing village of Skillinge on Sweden's south-eastern tip went straight from autumn to spring, with temperatures never dropping below zero for the required seven days in a row in recent months.

While we have your attention… a small request.
The Local has been giving the world the story of Sweden for the past 14 years, and we know that the news and information we provide makes a real difference to the lives of our readers. But here's the thing: advertising revenues across the media industry – the revenues that keep us going – are more unreliable than ever.
That's why we're asking readers to become Members. For just 50 SEK a month you can get access to all The Local's articles, including articles written just for Members. We'll also invite you to special events and give you exclusive offers. At the same time you'll ensure The Local stays thriving into the future.
Become a Member here. Or find out more here.
—
READ ALSO: Meet the vigilante weathermen determined to beat the sunshine stats

The rest of Sweden may want before announcing the start of barbecue season.

The area around Stockholm is still covered in snow and ice, and SMHI said temperatures are likely to hover at around 4-8C below zero even in the southern Götaland region from Sunday.

That's nothing compared to Kvikkjokk-Årrenjarka in northern Sweden, which was the coldest spot in the country on Thursday with the mercury plummeting to a shivering -37.2C.

Meteorologists even said that more national “isdygn” could be on their way next week – periods of 24 hours when temperatures stay below freezing across the entire country.

Nikkaluokta has so far had the coldest night of the season: -39.5C earlier in February.