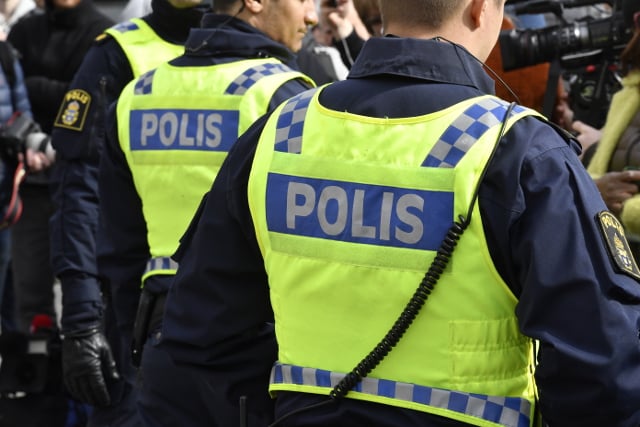 Police photographed the day after a jihadist sympathizer drove a truck down a Stockholms street, killing five. Photo: Jonas Ekströmer/TT

“In the past few years, the security situation in our part of the world has deteriorated and the threats to Sweden are greater now than they have been in a long time,” writes the outgoing head of the organization, Anders Thornberg, in the report.

Säpo said last year that some 3,000 violent extremists are currently based in Sweden, of whom around two thirds are believed to have Islamist motives.

Thornberg reiterates that the growth of extremist environments is “a reason for concern”.

“Our country is facing a 'new normal'. In just a few years, the number of individuals belonging to violent extremist circles has increased from hundreds to thousands.”

“The 'new normal' is something Sweden shares with the rest of Europe. The attacks in Manchester, London, Barcelona and Turku have all shown that we must work together to counter the threat posed by terrorism.”

He writes the main threat is posed by extremists sympathizing with violent Islamism.

“However, in the past year we have noted a significant increase in activities engaged in by the extreme right-wing environment. Some individuals belonging [to] this environment are also active in serious violent crime,” the report continues, also noting the emergence of far-left groups that could potentially grow stronger.

Säpo further notes in the annual report that close cooperation with security services in other countries, as well as other Swedish authorities, has yielded results with several arrests made across Europe in the past year.

While we have your attention… a small request.
The Local has been giving the world the story of Sweden for the past 14 years, and we know that the news and information we provide makes a real difference to the lives of our readers. But here's the thing: advertising revenues across the media industry – the revenues that keep us going – are more unreliable than ever.
That's why we're asking readers to become Members. For just 50 SEK a month you can get access to all The Local's articles, including articles written just for Members. We'll also invite you to special events and give you exclusive offers. At the same time you'll ensure The Local stays thriving into the future.
Become a Member here. Or find out more here.
—
In another key part of the report, Säpo warns that foreign powers may try to influence Sweden's upcoming election in 2018, replicating similar attempts in other countries.

“In the past few years, we have noticed various attempts by foreign powers to influence elections in other countries through both open and covert attacks.”

“Although the Swedish electoral system is robust, decentralized and manual – and therefore difficult to manipulate – it cannot be ruled out that certain foreign powers will take advantage of the Swedish election campaign to enhance conflicts in Swedish society and attempt to weaken the democratic system.”

Sweden is already taking steps to defend itself against foreign interference in its election process, which often takes the form of disinformation campaigns. Mikael Tofvesson of Sweden's Civil Contingencies Agency last year told The Local that although both it and Säpo are working hard to boost Sweden's preparedness, the country's citizens remain the last line of defence:

“Our population is relatively well-educated and IT savvy, so in that way we are fairly resistant. On the other hand in Sweden we are not as eager to debate things as in many other countries, so we let a lot of things go. Some join the debate, but many don't, normally you don't take on that fight,” he told The Local at the time.

“The people probably don't want the state to lead the debate on freedom of speech, it is something that has to come from within. If the people don't join the debate, democracy loses out. But we've become very time focused and everyone is careless with how they share information online. That's a vulnerability.”