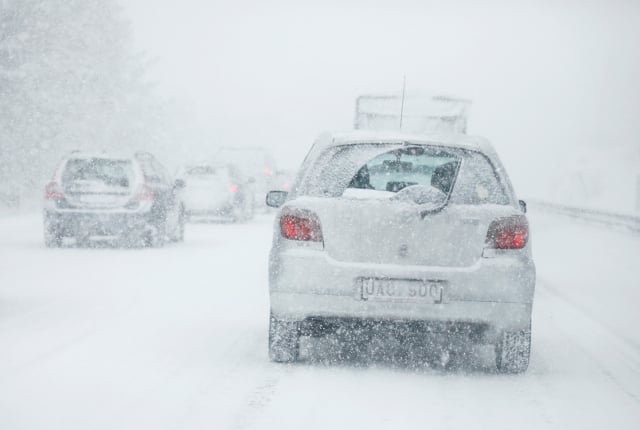 Snow on the E4 road on Monday. Photo: Christine Olsson/TT

We're wrapping up this live blog (in warm, woollen blankets) now. Stay up to date with the latest weather alerts across Sweden here. Stay safe, warm and remember to wear the right clothes for the cold weather:

But it’s not just the snow you need to be wary of, you also need to be prepared for some very icy temperatures. Overnight to Monday, the village of Gielas in northwestern Sweden recorded minus 42 degrees Celsius for example.

Kristina Lindqvist, who lives in nearby Solberg, told Radio Sweden about the dangers of getting stuck in the cold with her car:

“You have to drive carefully and keep your fingers crossed that your mobile phone is charged in case you have to call the towing services or a neighbor who can come and get you.”

16:20 Some 30 flights cancelled from Arlanda

In all, some 30 flight departures have been cancelled from Arlanda airport so far, and another 30  have been delayed, Hans Uhrus, a spokesman for airport operator Swedavia, said, adding also that the airport seemed to be getting even more snow now.

In Kalmar, where the snow resulted in flight delays and cancelled trains earlier in the day, it has now stopped snowing.

In the municipality of Mörbylånga on the southeastern island of Öland, the storm has prompted authorities to cancel all school transports for Tuesday. The schools will stay open for those who are able to get there, however.

The prime minister was able to continue his journey to Uppsala Akademiska Hospital where he was due to give a speech about healthcare, after his car went off the road at Knivsta on the E4 autoroute. Click here to read more about the accident.

The winter season brings new risks for drivers, sometimes ones you didn't even anticipate. Watch this video to make sure you stay safe on Sweden's roads even when temperatures drop.

Swedish radio reports that a car in which Prime Minister Stefan Löfven was travelling went off the road near Knivsta south of Uppsala at around 11.30am.

No one was injured in the accident, but the security police-owned vehicle was damaged and had to be replaced by another car before the prime minister could continue his journey.

The E4 road between Stockholm and Uppsala has reopened at Rotebro.

Kalmar Airport in southern Sweden is also reporting traffic issues this morning, with flights delayed for around an hour. The website of Swedavia, which operates Arlanda Airport, appears to be suffering under the strain of travellers checking their flight status; if you can't access their website, try your airline instead.

The E4 road between Stockholm and Uppsala is closed northbound at Rotebro after an accident involving 19 cars and a bus. According to initial reports three people have minor injuries and are being treated by paramedics. Emergency services say they expect to be able to open the road again in two hours.

It is still possible to get through if you're heading south, but not all southbound lanes are open and drivers are advised to use alternative routes if possible.

More than 20 departures from Arlanda Airport north of Stockholm have been cancelled as a result of snow on Monday, to cities including Düsseldorf, Warsaw, Åre Östersund, Gothenburg, Rome, Amsterdam and Frankfurt. Keep an eye on your flight status here.

For those of you who will still be able to fly today, make sure you head to the airport early as an accident on the E4 motorway between Stockholm and Arlanda this morning is causing long queues.

During Monday morning there may be disruptions in air traffic to and from Stockholm Arlanda due to heavy snow. You can find current arrival and departure times on the website and in the app.
For more information about your trip, please contact your airline or tour operator.