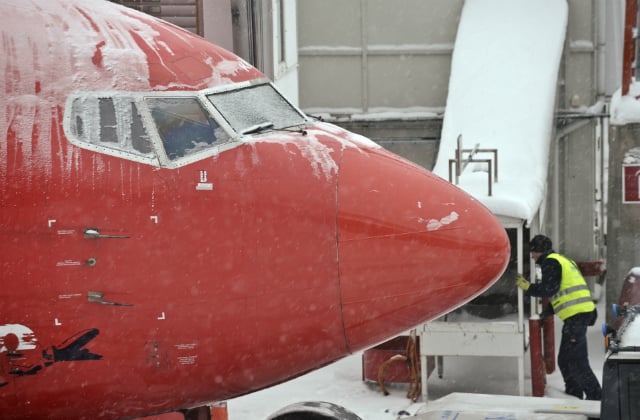 The plane pictured in this photo is not connected with the runway incident. Photo: Anders Wiklund/ SCANPIX

No one was injured in the incident, but resulted in the temporary closure of one of the airport's two runways.

“As they were taking off it slid off the runway,” Åsa Öhman, a press officer at airport operator Swedavia, told Swedish news agency TT.

It was not immediately clear what prompted the accident.

The BRA airliner had been redirected to Arlanda from Stockholm's second largest airport, Bromma, earlier in the day because of the weather and was returning to Bromma to pick up delayed passengers when the incident occurred.

The accident prompted Swedavia to close off one of the airport's two runways for about two hours.

It was not clear whether the aircraft had been damaged.

Sweden was hit by “the Siberian blast” Tuesday, an icy snow blizzard resulting in a series of car crashes across the country as well as dozens of cancelled trains and flights. The Swedish Transport Administration advised people in the most hard-hit areas, especially those living on the country’s eastern coast, to abstain from getting out on the roads at all. It also warned people of driving across the southern Öresund Bridge connecting Sweden with Denmark because of the strong winds.

The agency also announced it was bringing six tracked vehicles to Stockholm to ensure emergency transports can get through in the case the roads get too difficult.

In Sweden’s second biggest city, Göteborg, the weather prompted the collapse of a giant scaffolding structure, but there were no reports of any injuries.

The Swedish weather agency, SMHI, issued a class 1 weather warning due to the snow – the lowest warning on a scale of one to three – reaching from Stockholm down to Kalmar in the south.

Alexandra Ohlsson, an SMHI meteorologist, told TT that a “snow canon” had built up over the Baltic Sea, and which is expected to bring a lot more snow in over some parts of Sweden on Tuesday evening.

Authorities have also warned of the heightened risks of avalanches in some skiing areas, including the western Vindelfjällen,  the southern parts of Jämtlandsfjällen and the western Härjedalsfjällen.