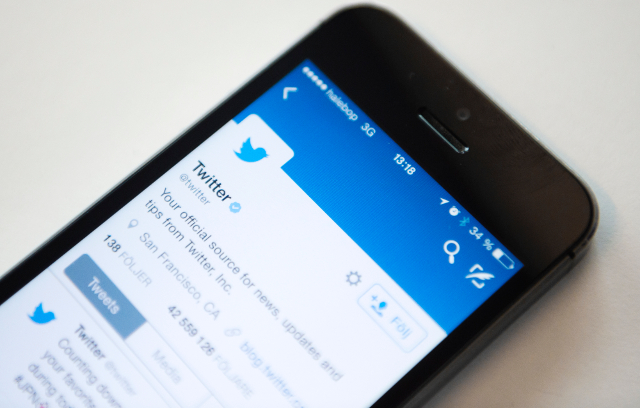 File photo of Twitter on a smartphone. Photo: Vilhelm Stokstad/TT

These are almost exclusively tweets relevant to Sweden's growing tech and startup community.

But on Tuesday evening it also ended up retweeting far-right propaganda, including a link to a radio podcast by neo-Nazi group the Nordic Resistance Movement. The original tweet had used a number of hashtags including #sthlmtech, #mondaymotivation and Swedish politics hashtag #svpol.

Twitter users quickly caught on to the strange account activity, with one commenting, “I wonder if #SthlmTech auto-retweets everything containing this hashtag, considering recent RTs.”

Fans of Stockholm football club AIK then seized the opportunity and started urging people to support their club, also tweeting insults at a rival football team, in a series of tweets using the #sthlmtech hashtag.

Sthlm Tech organizer Tyler Crowley urged users to report offending tweets, after The Local brought it to his attention on Wednesday around 12 hours later, but said he was unable to stop the auto-retweets.

“The @sthlmtech Twitter account is a bot account which simply auto-retweets every use of #sthlmtech hashtag. Nothing more, nothing less. There's not much I can do except ban bad actors once they are brought to my attention,” he told The Local in an e-mail.

He said a similar incident had only happened once before in the five-year history of the account.

“After banning the offender and removing the retweet the only thing we can do is notify @support.”

The retweet linking to the Nordic Resistance Movement was deleted later in the morning. A number of the other retweets remained on the Twitter account early on Wednesday afternoon.

Last year Stockholm University's English-language Twitter account, along with thousands of other accounts, accidentally posted a swastika and Turkish propaganda after its third-party application was targeted in a cyber attack. Stockholm University told The Local at the time it had responded by quickly deleting the tweet and temporarily disconnecting all its third-party applications.