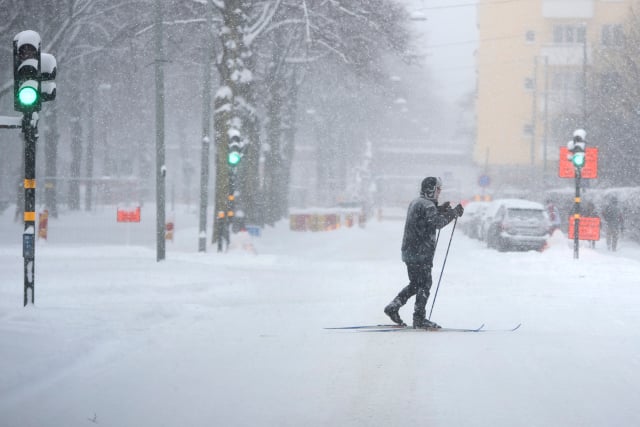 National weather agency SMHI's class-one snow warnings (the least serious kind on a scale from one to three) remained in place on Thursday for counties Skåne and Blekinge and the southern east coast.

South-eastern parts of Stockholm could also be hit with more snow on Thursday, it said.

“On the whole you could say that this problematic weather with snow flurries and drifting snow along the east coast of Götaland will continue in the next 24 hours, although the snow flurries are less intense and not as extensive,” SMHI meteorologist Therese Gadd told the TT newswire. Snow outside Ystad in Skåne on Wednesday. Photo: Andreas Hillergren/TT

Kalmar, which was hit hard by the blizzard this week, said its school buses would not run on Thursday either. The snowy weather caused major traffic problems in southern Sweden on Monday, Tuesday and Wednesday, with several accidents and motorway pile-ups reported across the region.

While we have your attention… a small request.
The Local has been giving you the story of Sweden for the past 14 years. But here's the thing: advertising revenues across the media industry – the revenues that keep us going – are more unreliable than ever.
That's why we're asking readers to become Members. For just 50 SEK a month you can get access to all The Local's articles, including articles written just for Members. We'll also invite you to special events and give you exclusive offers. At the same time you'll ensure The Local stays thriving into the future.
Become a Member here. Or find out more here.
—
Most of northern Sweden is expected to get quite pleasant winter weather on Thursday, with freezing cold temperatures dropping to around -20C or even -30C, but clear and sunny skies.

And the snow was not all bad. On Wednesday, a group of international surfers decided to take advantage of the waves south of Stockholm in below-freezing waters, creating some truly spectacular pictures:

IN PICTURES: Surfing the 'Beast from the East' in ice-cold Swedish waters