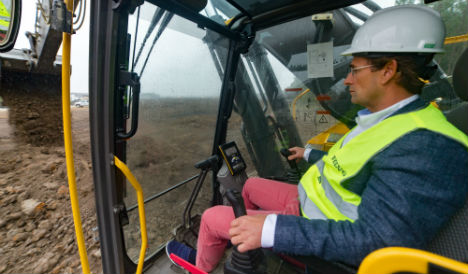 Lex Kerssemakers, CEO of Volvo Cars of North America, breaks ground on Volvo Cars’ first American factory in South Carolina. Photo: Volvo Cars.
In a tweet on Saturday, Trump said EU threats of retaliations to the steel and aluminium tariffs announced on Thursday, would me met with further escalation.

If the E.U. wants to further increase their already massive tariffs and barriers on U.S. companies doing business there, we will simply apply a Tax on their Cars which freely pour into the U.S. They make it impossible for our cars (and more) to sell there. Big trade imbalance!

The US president complained that other countries had been taking advantage of the US “for years”, “because of our very stupid trade deals”.

The United States has an $800 Billion Dollar Yearly Trade Deficit because of our “very stupid” trade deals and policies. Our jobs and wealth are being given to other countries that have taken advantage of us for years. They laugh at what fools our leaders have been. No more!

Volvo Cars has made moves to ward off US protectionist measures since being bought by China's Geely Holding Group, investing $1.1bn in building a new plant in South Carolina, where production is set to begin later this year, with 4,000 employed.
Volvo CEO Hakan Samuelsson has even pledged to export cars built at the plant to China.
Sweden’s government on Friday condemned Trump’s announcement that he would sign into force a 25 percent tariff on steel imports and a 10 percent tariff on aluminium imports.
Business minister Ann Linde said her government “deeply regretted Trump's decision”, and called for the European Union to respond.
“We cannot watch passively in the EU as the US brings such heavy tariffs,” she said. “Under WTO rules, there is a right to take safeguard actions, and that is what we need to discuss within the European Union.”
European Commission head Jean-Claude Juncker said on Friday that the EU was considering retaliatory 25% tariffs worth around $3.5bn on US exports such as Levi's jeans, Harley-Davidson motorbikes and Bourbon whisky.
Url copied to clipboard!