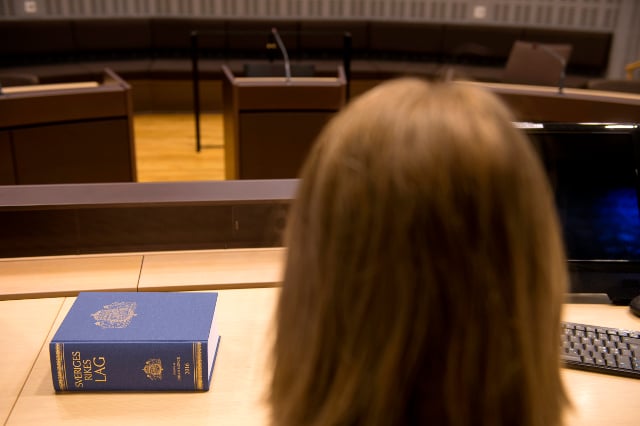 On Friday, The Local revealed how a Stockholm-based man was acquitted of allegedly assaulting his wife because his guilt could not be proven. The ruling, swung by two lay judges in a split court, included controversial arguments such as it not being uncommon for women to “falsely claim they have been assaulted” and that the man “came from a good family, unlike hers” as part of its reasoning.

READ ALSO: Swedish assault case thrown out because man 'seemed to come from a good family'

Other points of note included the lay judges arguing that the woman's credibility was damaged by going to the police rather than trying to resolve the matter within the family. It has since emerged that one of the lay judges had previously argued in favour of in some instances creating separate laws for Muslims living in Sweden.

What do lay judges do?

Swedish courts use lay judges appointed by political parties at municipal level to help the presiding professional judge apply legal rules. They are not qualified legal professionals, but ordinary citizens, and fulfill the role more commonly played by juries in countries like the UK, or the USA.

“There are rare cases in Sweden where there's a jury, but in criminal cases, the administrative courts, migration courts and others, it's lay judges,” Bengt Ivarsson, the former president of the Swedish Bar Association, explained to The Local.

In the example from Solna District Court reported on by The Local last week, the lay judges played a decisive role in deciding the outcome, as when there is no majority decision from the judges the district court rules in favour of the defendant.

“There is a very long tradition of lay judges in Sweden going back to the 1200s. But there have been quite a lot of changes since the 1200s, and that means we have to think about the lay judge system. How should it look, should it stay in place? There have been many changes to it since the 1200s of course, but I think the most problematic part is the party political link,” Ivarsson noted.

The political influence on the lay judge appointment process is the root of a common criticism of Sweden's legal system.

While in principle every Swedish citizen over the age of 18 is eligible for nomination as a lay judge, in practice, parties put forward party members for the positions. Though by taking the judicial oath lay judges swear not to allow personal political views to influence their decision making, studies have shown that those political affiliations nonetheless impact verdicts in criminal cases.

“If you're not Swedish you perhaps wouldn't understand the political role in appointing lay judges at all. In most democratic countries like the UK and USA for example, keeping the political and legal systems separate is essential,” Ivarsson said.

“We have a tradition in Sweden where political parties nominate the candidate, then choose them through the local council. I think that's a democratic problem: because only between 3-4 percent of the population are members in political parties. That means in practice that 96-97 percent of the population can't be chosen for the duty of lay judge. Though it's not forbidden to recruit outside of the party group, in practice it's those who are party members who are nominated.” Though the assignment of lay judges to cases is random, the appointment of political party members as lay judges means it is possible for there to be a lack of balance depending on the draw (in the case from last week, the two decisive lay judges were Centre Party members). That could lead to political parties swaying the decision-making process according to their ideology.

If such a lack of balance occurs there could be serious consequences. A Gothenburg University study from 2015 suggested for example that convictions of defendants with Arabic sounding names increased significantly when they were assigned (anti-immigration) Sweden Democrat lay judges, while convictions for cases involving a female victim increased according to the presence of Left Party lay judges.

“You can end up in situations where there are three Sweden Democrat lay judges in the migration court, or three Green Party lay judges there. Or three Feminist Initiative lay judges in a case where a woman was allegedly assaulted. And even if they don't exercise their party sympathies, they come with ideological baggage, and that can still be considered significant and in any case raise questions,” Ivarsson argued.

That is not to say that the lay judge system is in itself inherently bad – after all, for such a tradition to survive for hundreds of years in a democratic country it needs to have some support. Nor is bias the exclusive territory of lay judges – jurors can also be influenced by their personal and political prejudices.

And Ivarsson emphasized that there are plenty of good lay judges doing important work:

“In many cases there have been skilled, excellent lay judges who make for very good counterpoints to the judge, open up discussions about evidence evaluation and push to make sure that is solid, for example. It is not a given that you're a better judge of, say, what would be good for a child because you're a professional judge. Perhaps an everyday person would be just as good a judge of that.”

“It is also important that there is a transparency to the courts. We don't have televised trials here in Sweden, so a part of our transparency is lay judges taking part in the process,” he added.

A number of articles published in the wake of last week's story have a recurring theme: the argument that the role of political parties in appointing lay judges should end. That's something former bar association head Ivarsson agrees with.

“The system is not OK as it is. Cases like this and several others hurt the faith in our courts. The party political link must be removed. Parties can find other roles for their members, it shouldn't be the courts providing that. I think it's time to launch an inquiry tasked with looking over the system and finding one that works better and is fit for the times.”

“You have to be open about the process, get rid of the political link, and perhaps we don't need lay judges in as many cases as we have them in today. I'm not sure a jury system would necessarily be better – there are many excellent apolitical lay judges who do very good work, but the quality control clearly isn't working, and people are coming in who are unsuitable for the task for various reasons,” he concluded.