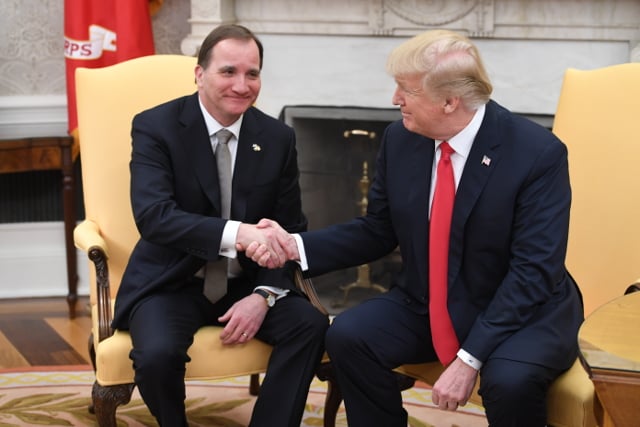 Löfven is the first EU leader to meet Trump since the US president last week announced plans to impose tariffs on imported steel and aluminium, which would hit European and Swedish companies hard.

Addressing American and Swedish reporters at a joint press conference on Tuesday, Trump reaffirmed his stance on tariffs, arguing that the US had been “taken advantage of by friendly and not-so-friendly countries” and saying the EU had been particularly tough.

Löfven, a former welder and former leader of Sweden's metalworkers' trade union, on the other hand supported free trade, noting that Swedish prosperity was built on “cooperation, competition and trade”.

The Social Democrat leader had brought a large business delegation with him to Washington DC with representatives of some of Sweden's biggest companies. He spoke warmly about Swedish investments in the US and vice versa when questioned by reporters and stressed the importance of cooperation.

“My country may not be big but we support directly and indirectly almost one million jobs in the United States,” he said.

READ ALSO: Electrolux freezes US investments to send a 'message' to Trump

The two leaders also discussed the situation in North Korea. Sweden, which has a long-standing diplomatic relationship with North Korea, acts as a protecting power for the US.

“Sweden will always be helpful,” Trump said at an impromptu press conference in the Oval Office earlier in the day, before repeating similar comments later. “They are a great friend and a very competent friend.”

Trump has provoked anger several times in Sweden and other European countries since he took office, not least with his infamous “last night in Sweden” comments which prompted several Swedes to hit back, with Löfven and even King Carl XVI Gustaf himself emphasizing the importance of fact-checking.

Asked if he stood by his comments, Trump said he did. “You have a wonderful prime minister,” he said but added “you have a problem with immigration”. “I was one of the first people to say it, I took a little heat for it but I was right,” he claimed, adding “I know the problem will slowly disappear”.

Löfven conceded Sweden had its share of problems, but not of that magnitude. “Sweden has its own share of domestic challenges, no doubt about that. But we're dealing with them and we also have a good foundation for dealing with them, not least with a strong economy and shrinking unemployment.”