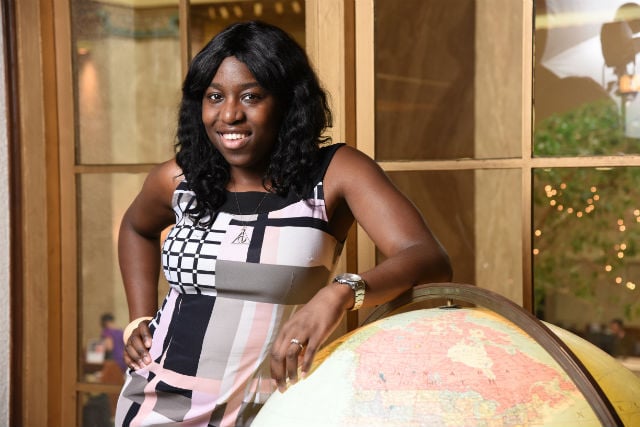 However, she’d already made up her mind to stay. And having survived her first winter, she’s convinced that she made the right decision.

So just how did an American with no apparent connection to Sweden wind up living in Stockholm?

“I knew what most Americans know about Sweden, that it’s very liberal and there are a lot of opportunities,” Christine tells The Local.

Following the US election, Christine and her husband packed their bags and figuratively set sail for Stockholm, seeking a city more in line with their political beliefs.

For Christine, it was also a priority to move to a city where her gender wouldn't hinder her professional potential.

Find out what makes Stockholm 'A Woman's Place'

The couple knew about Sweden’s glowing reputation for equality — a reputation often galvanised as ranking after ranking declares it the best (or thereabouts) at, well, nearly everything.

In 2017, Sweden was ranked number one in the world regarding its commitment to reducing inequality and, just recently, The Economist named it the best country in the world to be a working woman.

To top it off, Sweden has never finished lower than fourth in the annual Global Gender Gap report which, since 2006, has measured equality in economics, politics, education, and health.

Impressive, yes, but rankings aren’t everything. What’s the point in being the poster child for equality if reality doesn’t live up to the expectation?

When it comes to gender equality, however, Sweden’s capital doesn’t just talk the talk. Stockholm is proof that a whole city can embrace equal opportunities and emerge stronger and more prosperous on the other side.

For the first six months, Christine took Swedish lessons and worked remotely as a consultant before being offered a full-time role as a data analyst at Universal Music Group.

On starting her new job, she was pleasantly surprised to find the two people working alongside her on the analyst team were both women.

“It was a totally new experience for me,” she says.

Christine has also been amazed by how many of her Stockholm-based female friends have high-flying careers in tech, typically a male-dominated industry. One friend, she says, has just landed a role at a video game company while another is a software developer at Spotify.

“My female friends are all working in jobs that would almost 100 percent be done by men in the States. It’s so interesting to be in this situation, and amazing that young girls can constantly see role models that look like them.”

But it hasn’t always been the case. As with most countries, the situation for women in Sweden wasn’t as promising in the past as it is today.

However, there’s one crucial difference. Sweden also has a long track record of doing something about it.

Questions, at least, about gender roles were already being raised by Swedish women as far back as the seventeenth century.

England’s Mary Wollstonecraft may be credited with publishing one of the first feminist treatises in 1792, but it was almost exactly 100 years before that, in 1693, that Stockholm born-and-bred writer Sophia Elisabet Brenner published her poem Det Qwinliga Könetz rätmätige Förswar (The justified defence of the female sex).

Stockholm is declaring itself 'A Woman's Place. Find out why.

Refusing to be silenced, Swedish women continued to fight discrimination throughout the eighteenth and nineteenth centuries.

In 1761, Hedvig Charlotta Nordenflycht fired back at the misogyny of Genevan philosopher Rousseau in her poem Fruentimrets försvar (Defense of Women), while the 1800s saw the formation of a string of charitable women’s societies dedicated to helping poor females work and support themselves.

Although Swedish women didn’t achieve suffrage until 1921, a year after American women were granted the vote and three years after British women, in the following years they attained vast improvements in both their civil and political rights.

By 1925, they were able to vote in general elections, had property rights for married women, and access to higher positions in the civil service.

Furthermore, Sweden’s neutrality during World War II put it in a position of strength while many other countries in Europe were in ruins, explains Annika Olsson, Senior Lecturer in Gender Studies at Stockholm University.

This gave Sweden a critical head start to bolster both society and economy while other countries were quite literally building from the ground up.

A turning point, says Olsson, came in the 1960s, when Sweden’s social democratic government brought in a series of reforms that gave women more equality of opportunity.

People were taxed as individuals and not on a family basis, arming women with more individual rights and status. This was followed by the first equal status policy which was included in the working programme of the Labour Party in 1965.

Demand for female labour grew in the 1970s as the possibilities to combine work and family also increased. The introduction of free daycare for six-year-old children was the first step in a long line of programs expanding daycare and facilitating the return of mothers to the workforce.

“It was a movement in many spheres that contributed to the public discussion of gender equality,” says Olsson.

“It happened within the political parties but also in academia, and at the same time the unions were also pushing for reform involving gender equality such as no sexual harassment in the workplace and equal pay.”

In Olsson’s opinion, this collective push for equality was what really drove the change.

In the years following the radical reforms of the sixties and seventies, the dust gradually settled and a society has emerged where equality comes naturally.

And nowhere in Sweden is this better illustrated than in Stockholm.

The capital is a model example of a gender-equal society in full swing; a booming and increasingly cosmopolitan city where women are flourishing professionally and personally. Signs of gender equality are evident everywhere, from men taking their toddlers to preschool in pushchairs every morning to women rising the ranks in traditionally male-dominated industries.

“I see way more female founders and CEOs here,” she says of her experience networking in the city.

In fact, there’s more female everything in the Swedish workforce.

Women hold 47.5 percent of jobs in Sweden, and 32 percent of board positions in listed companies. While there’s still some work to go to get more female board members, this is still far higher than the European average of 23 percent.

Asked why she thinks this is the case, Christine says that during her first few months in Stockholm she attended many events aimed specifically at women. From all female hackathons to women’s-only networking events, the women in Stockholm have formed a supportive sorority where they feel safe to discuss their ideas and develop their skills.

“My guess is women here just feel more comfortable about getting involved. It’s a really exciting environment,” she says.

And while Stockholm’s economic success in recent years can’t be exclusively credited to more women in the workforce, increased gender equality is reaping positive results in businesses worldwide.

In a 2017 study, McKinsey found that companies in the top quartile for gender diversity were 21 percent more likely to experience above-average profitability than companies in the fourth quartile.

And when it comes to gender diversity, you’d be hard-pressed to find a city where it’s more widespread than Stockholm. It’s what makes it the best place in the world to be a woman.

“This is absolutely a good place for women,” says Christine. “I feel so safe here which is completely different to what I’m used to. I have every opportunity to succeed in Stockholm.”

Listen to the first 'A Woman's Place' podcast, brought to you in collaboration between The Local and Invest Stockholm: