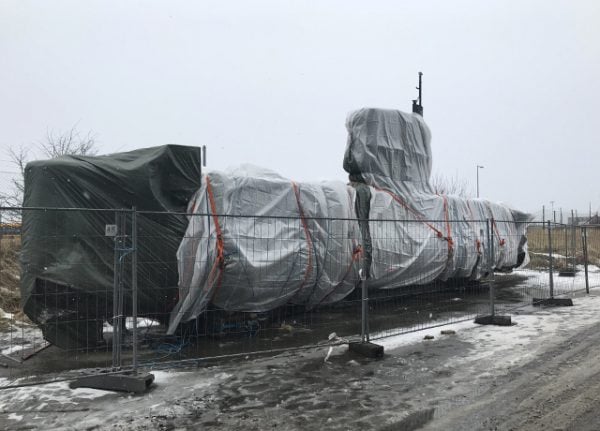 The case against the 47-year-old self-taught engineer begins at 9:30 am at the Copenhagen district court, attended by Wall's family and scores of reporters from Danish and foreign media.

Prosecutor Jakob Buch-Jepsen has already said he will call for a life sentence, which in Denmark averages around 16 years.

An eccentric, semi-celebrity in Denmark who built submarines and rockets and dreamed of developing private space travel, Madsen faces charges of premeditated murder, desecrating a corpse, and aggravated sexual assault.

The case, which will run through to April 25, is expected to clarify how Wall died on board Madsen's Nautilus submarine on August 10, 2017, when she went for an evening sail with him to interview him for an article. He has changed his version of events several times.

He has denied murdering her, saying her death was an accident but providing no explanation. He has however admitted to chopping her up and throwing her remains overboard.

His lawyer, Betina Hald Engmark, has remained tight-lipped and has not revealed what he intends to tell the court.

Divers combed Danish waters in the weeks following Wall's disappearance,ultimately recovering all of her remains.

An autopsy was unable to determine the cause of death, nor has a motive been established.

But prosecutors have said they believe Madsen killed Wall as part of a sexual fantasy.

They believe he bound the 30-year-old freelance reporter by the head, arms and legs before beating her and stabbing her repeatedly in her genital area.

They said he then killed her — probably strangling her or slitting her throat — and cut her up with a saw, stuffing her torso, head, arms and legs in separate bags weighed down with metal objects, and dumping them in Koge Bay off Copenhagen.

Madsen has denied any sexual relations with Wall.

He said he panicked after her death, and dismembered her and threw her remains overboard.

According to the prosecution, investigators seized a hard drive in his workshop containing fetish films in which women were tortured, decapitated and burned alive.

Madsen said the drive was not his.

Wall was reported missing by her boyfriend after she failed to return home from her trip on the 60-foot (18-metre) vessel on August 10.

On that evening, Wall was having a going-away party — she and her boyfriend were due to move to China a few days after — when Madsen, whom she had been trying to interview, contacted her and invited her out on the sub.

She hesitated to leave the party, but ultimately decided to go.

Her boyfriend later told Danish television programme Station 2 that he had decided not to join Wall, so as to not leave their friends alone at the party.

When Wall didn't come home, her boyfriend reported the Nautilus missing in the middle of the night.

Madsen was plucked from the sea the next morning by a pleasure craft, just as his vessel was sinking.

Wall — who wrote about Chinese feminists rising up against “Donald Trump's misogyny” and Cubans using hard drives to access foreign culture — criss-crossed the globe in search of unique stories.

Shortly after her death, the Columbia Journalism School graduate's family and friends set up a fund in her name to help women journalists reporting on similar issues.

“This will be a way for everyone to focus on the future instead of it all ending that night on the submarine,” her mother Ingrid Wall told Swedish TT news agency in the days before the trial.

“This means her legacy will live on,” she added.

With almost $200,000 (160,000 euros) collected in donations so far, the fund is aimed at helping women journalists ensure their reporting assignments are safe.

“This is about being able to live well and safely” and “to afford a proper insurance,” Wall's mother said.