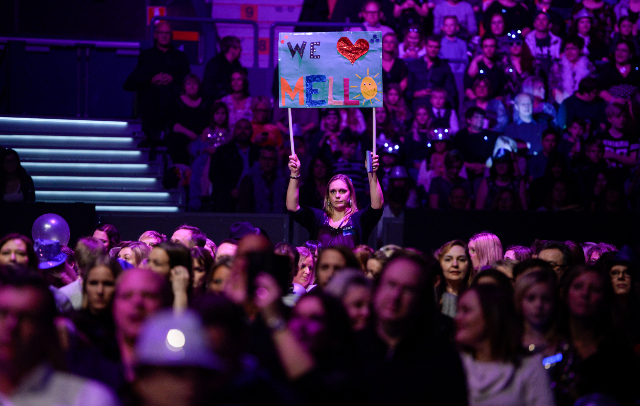 Sweden's Melodifestivalen fever is rubbing off on Eurovision fans all over the world. Photo: Jessica Gow/TT

Selecting the song to represent their nation on the Eurovision stage is not a task the Swedes take lightly. A months-long selection process culminates in the televised Melodifestivalen semi-finals held across the country, and an elaborately-staged finale in the Swedish capital. It's a big deal in Sweden.

But that's not altogether surprising. Only Ireland has won Eurovision more times than Sweden, and Melodifestivalen gave them Abba, the band that put this northern nation on the musical map. The final comes at the end of the long, dark Swedish winter so no one would begrudge the Swedes the guilty pleasure of an all-singing, all-sparkling music contest in the run-up to spring.

More startling is the large size of Melodifestivalen's following abroad. In January, the show's official Twitter account switched its language from Swedish to English due to the huge number of fans abroad, and '#Melfest' was a top trend on Twitter in the UK and Spain during the 2017 broadcasts. The Local chatted to some of Melodifestivalen's international superfans to find out what they love about the musical extravaganza.

For 16-year-old Sabina, who lives in Qatar, the show is a way to connect with her roots.

“My mother is Swedish, so she grew up with Melodifestivalen, and so did the rest of my family. It really connects our whole family, even if I am living 1000 miles away from them. Even my dad, who doesn't understand a word of Swedish, loves the contest!” she tells The Local. Sabina, whose mother grew up with Melodifestivalen. Photo: Private

A long-time Eurovision fan, Sabina says she's always been impressed by the quality of Sweden's entries, so she enjoys watching the lengthy selection process.

“There is no other competition like the Melodifestivalen on this planet. The singers will always surprise you no matter what, whether it's from a guy with singing fruit to two guys singing about getting naked. Its a real treat!”

Due to the difference in time zones, she has to watch the shows the day after they air, which means avoiding social media in the meantime. This year, Sabina plans to watch the final with a friend who is hosting a Melodifestivalen party, and says the festival brings Doha's small Swedish community together. And next year, she and her family plan to travel to Sweden for the festival.

But it's not only Swedes abroad who find a sense of community in 'Mello', as it's known to fans.

British Eurovision writer Rob Holley has been following Melodifestivalen “religiously” for over five years, and after attending screenings of the final at London's Swedish Church, this year he is hosting a viewing party of his own.

While most UK fans stream the show online, Holley says nothing compares to watching it live: “It's a great shared experience. It's fandom at its purest.”

A few of his favourite moments from the show over the years include singer Charlotte Perrelli's ode to the schlager, Här Står Jag; Swedish-Tanzanian singer SaRaha's East African-inspired song Kizunguzungu, and comedy music duo Samir and Viktor's paddling pool performance of Bada Nakna ('Swimming Naked', the song mentioned by Sabina above). It was Swedish icon Loreen, who won Melodifestivalen and Eurovision in 2012 with Euphoria, and comedy actress Sarah Dawn Finer who portrays a spokesperson of the European Broadcasting Union, who first attracted Holley to the show. He says these two performances both showed viewers in the UK, where Eurovision is less popular than elsewhere in the continent, that the show could still be fun.

“Sweden was showing us that hey, yeah, we can still have fun with Eurovision and pop music, but there's also a level of respect for the stage-craft and talent that's completely beyond the reach of Terry Wogan's snarky one-liners. Loreen and Lynda typify that balance,” he explains, comparing the Swedes to the legendary Irish-British radio and television host who was the BBC's Eurovision commentator from 1971 to 2008.

Having attended the screenings at London's Swedish Church for several years, Holley says the events have got increasingly busy, to the point that some friends couldn't get in for the final last year. This was what prompted him to host his own screening in a pub, and the Melfest fan says he's already noticed several other events in the capital and in Manchester.

“2018 might be a bit of a watershed moment for UK Melfest parties. Melfest is such a warm and inclusive experience that it's being sought out by international viewers – and that blend of talent and positivity is slowly, surely, rubbing off on the way the UK approaches our national final,” says Holley, who believes that both the improving quality of the songs on the show and the option to stream it online are behind its soaring international fame.

In fact, another sign that Sweden's Eurovision fever is rubbing off on the UK is the recruitment of former Swedish winner Måns Zelmerlöw to host the British selection show earlier this year.

At the time, the pop star said he hoped to continue his involvement with the UK show, to “help develop the competition so that it becomes more of a Melodifestivalen sort of thing”.

Zelmerlöw also noted that the BBC had a smaller budget for the show than was available to Melodifestivalen, and Kyle Batt, another British fan of the Swedish contest, says the money and effort the Swedes put into the show are the key to its success.

“Sweden has the money for it. They make Melodifestivalen with the right blend of staying true to the Swedish audience while keeping Eurovision in mind; some other selections make their shows predictable for the audience to choose one song,” he tells The Local.

Batt, based in southern England, first discovered Melodifestivalen in 2014. It was Swedish singer and former Eurovision victor Loreen who first got him interested in Eurovision, and after seeing highlights from the Swedish programme, which had just finished for the year, he was hooked. Watching clips from the 2014 edition, he says Melodifestivalen looked “intense and exciting”. “It was a close contest between Sanna Nielsen and Ace Wilder, but the quality of songs in the final proved it to be the best national selection process in Europe – all of the songs in each year would make credible entries to Eurovision,” he says. “That's what most international fans are looking for. It's not a predictable show, there is drama, shockers and overall entertainment of music.”

As a non-Swedish speaker, he says he actually enjoys the fact he can't understand much of the speech and lyrics, though he says he'd appreciate more use of English in the show, “if they could incorporate it without losing what's true to them”.

Batt's pitch for Melfest is “it's a smaller Eurovision, but less lengthy, quality diverse music, and the typical trash TV that everyone truly loves, whether they like to admit it or not”.

All the fans we spoke to shared this enjoyment of the show's self-awareness. Shima van Straijlendorff, a Barcelona-based viewer, says her favourite moment came in 2017, when Daniel Norberg performed a parody of all the finalists' songs. Van Straijlendorff has been watching Melodifestivalen since 2010, when she tuned in to support singer Darrin Zaymar who was competing that year. “I ended up really liking it and have been religiously following the contest ever since,” she says, and like Holley and Batt, she credits the show's high production value with its success. “Mello facilitates performers to express their artistry in a big way through spectacular staging and big media exposure.”

Another factor in the programme's success, she says, is the way that the creators of the songs are able to predict music trends in advance. “Most of Mello entries are simple, relatable, and wrapped in bubblegum pop staging. Even though Mello doesn't always come out with the most original music style or presentation, there is no doubts that it adds value to the global music scene,” the music fan explains.

But while she enjoys discovering new artists through she show, the best part of Melodifestivalen for her has been the experience of being part of the global community of fans. Van Straijlendorff has been watching the semi-finals online and will be in Stockholm for the grand final on Saturday.

“I am amazed by how this programme can unite people from many different parts of the globe. Because of Mello, now I have many international friends who I hope to meet in person one day,” she says.