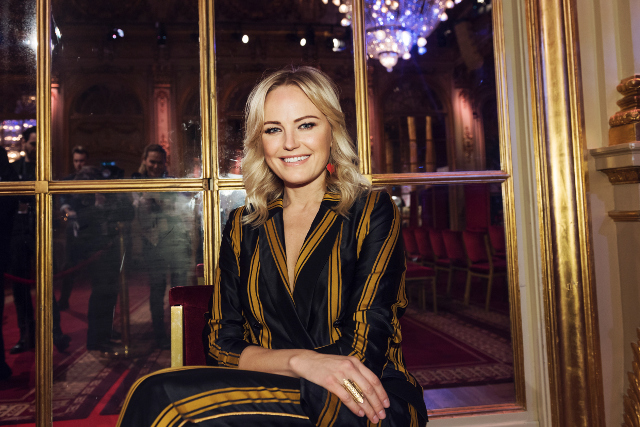 The movie in question is “En del av mitt hjärta”, a new Mamma Mia-style musical based on the music of beloved Swedish singer songwriter Tomas Ledin.

International readers unfamiliar with his work shouldn't feel ashamed: at the unveiling of the project at Stockholm's lavish Grand Hotel on Monday, star Åkerman admitted that growing up far away in Canada, she didn't truly grasp how big Ledin was until a relative labelled him Sweden's answer to Bruce Springsteen.

“But a song is a song whether you hear it today or ten years ago, there's maybe more of a difference in terms of nostalgia, but emotionally you can connect with music the first time you hear it,” Åkerman explains to The Local.

“All of his lyrics are so easy to relate to and connect to, and they've picked really great songs that bring you even more into the characters and the journey.”

Though bilingual thanks to her Swedish parents, Åkerman was only two when she moved to Canada, and has spent most of her life there and in LA. Despite her wealth of experience in movies including mega-budget blockbusters like Watchmen, the prospect of taking on a first role in Swedish makes her nervous, especially with singing added to the equation.

“With new roles, new characters, diving into new psyches and people, there are a lot of things that go into it and I'm always both nervous and excited. But with this the nerves are definitely a bit heightened because I've never had to work with a script that was in a different language, so that's a big and new challenge.”

“Even going through the table read yesterday I was thinking wow, the cadence is different, the rhythms are different in Swedish. The way I play things are too. So I'm noticing little things that'll be very fun, thrilling but also challenging to work through. This is my first time in this language, so I have the skill-set as far as the acting goes, but the rest is new,” the actress continues.

READ ALSO: Feeling like a foreigner at home. The strange nature of dual nationality

Changing language can also change a person's personality: people who are bilingual are sometimes louder in one language compared to another for example, and for Åkerman there's a shift in her confidence.

“It does shift you for sure – for me it's about confidence, and if you're more confident in one language compared to the other. I feel a little bit younger when I speak Swedish because my vocabulary isn't as vast, then I feel more my age when I speak English because I've worked with it for so long. So this will be an interesting challenge. It'll be completely doable, but it's an added level,” she notes.

In an opposite trajectory to the actress, af Sillén moved to Sweden from Brazil when he was a kid, so the director doesn't have the same luxury of ignorance regarding just how big Ledin's music is in the Scandinavian nation. That means huge pressure on him to get the film right. Ledin (left), Åkerman and af Sillén at the unveilling of the movie. Photo: Lee Roden/The Local

“I feel such pressure I can't even tell you, but in a good way,” he laughs.

“It's something I've been longing for, and it feels like I've got to do this, I've got to try to do this. If it works I'll be very very happy. If it doesn't work, we tried, that's life.”

“I started working in this industry when I was 18, writing comedy when I was 18, and I've never taken anything for granted. I grew up on the streets of Brazil and was adopted by an American mother and Swedish father, and got to grow up in a little house in the outskirts of Stockholm. My whole life has been about grabbing it and trying to do something good with it, and then asking what's next,” he reflects.

Also a writer who has worked on Melodifestivalen and Eurovision, he has no qualms conceding that Sweden's smash hit “Mamma Mia!” is a source of inspiration for his forthcoming movie. Not just in terms of the form, but in the script-first approach.

“It's about the story, you have to focus on the story. Mamma Mia was a huge success and I'm very inspired by how they worked. They waited for six or seven years to find the right story and knew that it's all about the script, and the music should work with that. In this case we got the story right away, when I was approached the script was there and when I read it I knew it had everything a musical needs. So that's the key element,” he observes.

“I've been offered to direct movies before where I felt it was the wrong script, and I didn't feel passionate about it so I said no. This script and idea came and I genuinely felt like I should do this. Malin knows that feeling because she read it and thought 'I should play this part'. That's a great feeling.”

That Ledin – who has been churning out hits for more than five decades – signed off on the movie is good evidence of its quality, according to the director.

“He's a very smart guy. When he read the script he said 'use my music'. It's all about the script for him too. With this cast, with Malin here and the rest all supporting, there's a great feeling of everyone longing to do this movie, wanting to do it.”

READ ALSO: Why Swedish pop has been annoying you for years

As not only Abba but countless others have shown, Swedish artists have an ability to cross borders and achieve significant success in international markets. But what exactly is it that makes Swedish music so special?

“That's a great question. It all started with Abba. After Abba, it's insane how such a small country has given so much to the world – an example is the huge Britney Spears hits like 'Hit Me Baby One More Time' and 'Crazy', written by Swedes like Max Martin, Jörgen Elofsson. These are such huge songs, and I think it comes down to our love of a good chorus. Abba started this love of huge catchy choruses, and that's now in the Swedish DNA for some reason, that's the only explanation I can have for it,” af Sillén argues.

“I don't quite know what the magic is behind it, why we've produced so many great singers. Maybe because we're such a small country it feels like it's disproportionate. I remember coming here and going to school for half a year when I was 13 just to try it out – it wasn't for me because I missed my friends back home – but I do remember being part of the choir was a cool thing in Sweden. In Canada you were a geek. Here it was promoted, the cool kids went to choir. So culturally there might be something there, singing is considered cool. There's no shame,” Åkerman concludes.

READ ALSO: The shy Swede behind a host of international hits