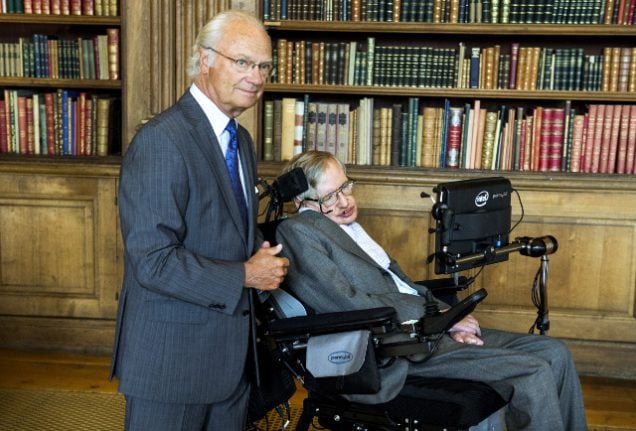 Unless there is a rule change to once again permit the awarding of the honour posthumously, Hawking, who died at the age of 76 on Wednesday, will now never receive a Nobel Prize.

The obvious question is why someone who is highly regarded and influential in scientific circles for his contributions to our understanding of the universe never had his work recognized by the Royal Swedish Academy of Sciences.

The answer lies in the rules the panel must follow when awarding the Nobel Prize in Physics.

“The prize is given to discoveries proven by experiments, or for pioneering theoretical methodological developments which then led to results proven through experiment,” Stockholm University physics professor Bo Sundborg explained to The Local.

The Royal Swedish Academy judged that Hawking's most significant work is yet to be proven through experiment, so it has therefore not qualified for a prize.

“He made important predictions 'proven' by observing cosmic thermal radiation, but there are still alternative explanations which can produce similar results. That ensures that a prize in that area has to wait,” Sundborg continued.

“You can have enormous significance without fulfilling that criteria, so his lack of a Nobel Prize does not downgrade him.”

Even the English physicist's well-known work on black holes and the expansion of the universe has not ticked all the Nobel boxes. As he commented at a Stockholm lecture in 2015: “If some researchers find a black hole, I will get a Nobel Prize”.

Debates about the strict process of awarding a Nobel Prize are common and Hawking is by no means alone. Even Albert Einstein, perhaps the greatest physicist of all time, only received one during his lifetime – and not for his work on relativity theory.

“Einstein got the Nobel Prize for the photoelectric effect which was proven in experiments. However his predictions regarding the theory of special relativity, Brownian motion, and gravitational theory were also proven during his lifetime. So it's really more startling that Einstein wasn't awarded more Nobel Prizes than it is Hawking not getting one,” Sundborg argued.

Indeed Einstein was so disenchanted with the Nobel committee by the time he won his prize in 1921 that he didn't bother to come and pick it up, instead choosing to continue a tour of Japan giving lectures.

As for Hawking, Nobel Committee for Physics member Ulf Danielsson told The Local that while his role prevents him from commenting specifically on how past awards have been decided, the late physicist's legacy is beyond doubt:

'”Hawking's research on black holes was pioneering and will have great significance in the future.”

READ ALSO: Unlike Hawking, Bob Dylan has a Nobel Prize