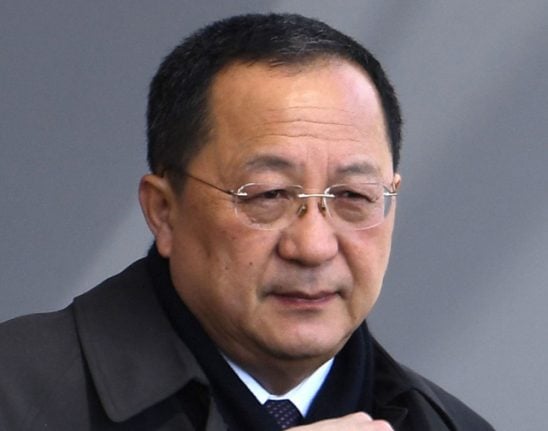 As the director of Stockholm-based research and policy institute the Institute for Security and Development Policy, Niklas Swanström has hosted North Korean research fellows and met the country's foreign minister Ri Yong-Ho.

The Swedish expert was careful in his conclusions when analyzing today's developments.

“I wouldn't draw any huge conclusions from the meeting. They'll speak about bilateral relations, the security situation on the Korean peninsula, and Sweden's role as a protecting power in North Korea. Then of course the meeting with the USA will come up, but we're far away from being able to say it will be in Sweden or it will be somewhere else,” Swanström told The Local.

“Keep in mind that US Secretary of State Rex Tillerson is leaving his position right now, and (replacement) Mike Pompeo needs to come in, so I'm not sure that there's a clear strategy there yet.”

Swanström explained that the role of the minister for foreign affairs within the Korean government cannot be compared to a foreign minister in a country like Sweden in terms of their stature.

“It's worth keeping in mind that the foreign minister in the North Korean set-up is not on the level of someone who can decide about a top level meeting. So this is perhaps a meeting about a further meeting regarding something on a higher level,” he noted.

Ri previously worked in Sweden at the North Korean embassy during the 1980s, a detail that may have played a part in this week's visit happening. But Swanström speculated that a future meeting at the highest level between the US and North Korea is more likely to take place closer to home for Kim Jong-Un than in Scandinavia.

The North Korean leader has not left his home nation since taking over power in 2011.

“Ri is very positive about Sweden. I've met him myself, he had a positive time in Sweden, and he's generally a good person to deal with. But he has his limitations due to his level. I think his personal relationship with Sweden could have played a part (in this week's developments), but if there's going to be a higher level meeting, I think it will take place locally on the Korean peninsula – in the demilitarized zone instead of Sweden, Switzerland, Norway and so on.”

“The hysteria that's kicking off now is a bit too much: it's a good development, a feather in the cap of the Swedish foreign ministry, but it's not yet certain that further down the line there will be a highest level meeting. We should hold our horses a bit with that one,” Swanström concluded.