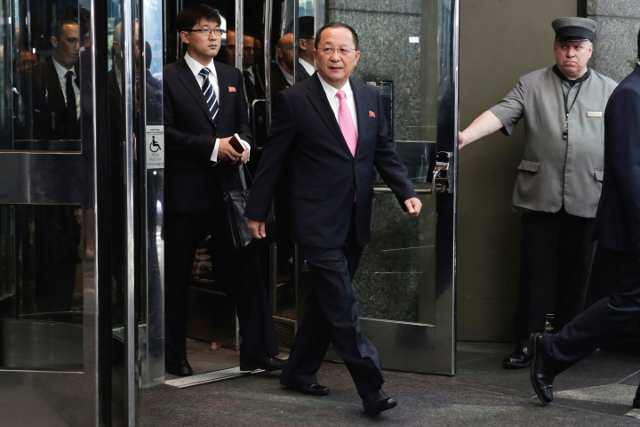 North Korea's Minister for Foreign Affairs Ri Yong-Ho is to meet his Swedish counterpart Margot Wallström on March 15th and 16th, the Swedish Ministry of Foreign Affairs confirmed on Thursday.

The talks are to focus on Sweden's consular role as a protecting power for the United States, Canada and Australia in North Korea. “They will also address the security situation on the Korean Peninsula, which is high on the Security Council agenda,” said the Swedish Foreign Ministry in a statement.

Sweden, which has a uniquely long-standing diplomatic relationship with North Korea, is also a non-permanent member of the Security Council 2017-2018, which has unanimously condemned the country's nuclear weapons and missile programmes and demanded their complete elimination.

“The Security Council has also emphasized the need for intensified diplomatic efforts to find a peaceful solution to the conflict. Sweden fully support the Security Council resolutions. The aim of the visit is to contribute to the effective implementation of the resolutions,” said the Swedish Foreign Ministry.

South Korea's Yonhap news agency reports that Minister for Foreign Affairs Ri is accompanied by Choe Kang II – deputy director general of the North American bureau of North Korea’s foreign ministry – while transferring in China ahead of his flight to Stockholm.

“We can't rule out the possibility of a contact between the North and the US” during Ri's trip to Sweden, Yonhap quotes a Beijing source as saying.

ANALYSIS: So North Korea's minister is coming to Sweden, but what does it actually mean?

“If we can help in any way, we will do it,” he noted, adding that “the fact that we are a protecting power for the US, have been at the border since the 1950s, and have had an embassy in Pyongyang since the start of the 1970s has given us a special relationship with North Korea in which we feel they trust us”.

Löfven's comments came only a few days after he met President Trump at the White House and offered to be a “channel” in improving US-North Korea relations. Trump meanwhile said it was thanks to Swedish negotiations that American student Otto Warmbier was released from North Korea last year, where he was being held in prison.

READ ALSO: Löfven offers to help US with North Korea

According to Swedish news agency TT, “all the major players with interests in the Korean peninsula” have been part of the preparations for the Sweden visit, and the hope is that it will lead to further meetings at a higher level. Foreign Minister Ri worked at the North Korean embassy in Sweden during the 1980s.