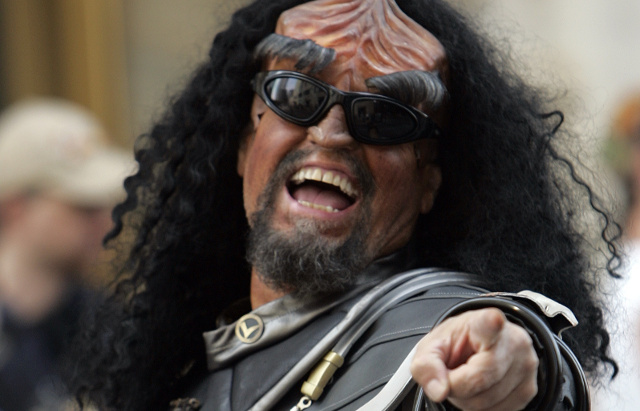 A happy Klingon at the DragonCon convention. Photo: Todd Bennett/AP

Stockholm-based Felix Malmenbeck knows firsthand that finding other Klingon speakers to interact with isn't always straightforward, so he was more than happy to share his knowledge and help create the new course.

“I first started learning Klingon in 2006, but for a long time I had nowhere to practise it regularly. It wasn't really until I started contributing to the Klingon translation of Facebook in 2010 that it started to become a bigger part of my everyday life, so my trip to fluency really began then,” Malmenbeck explained to The Local. The Swede had to wait until 2011 before he could have his first real-time conversation in Klingon with another human, traveling to a convention in Germany in order to do so.

In the past, learning Klingon was primarily achieved by studying the lengthy tombs on the language by its creator, Marc Okrand, a linguistics expert who helped develop it for Star Trek in the 1980s.

“The primary source for any aspiring Klingon speaker is The Klingon Dictionary by Marc Okrand, which lays out all the basics of the language,” Malmenbeck noted, adding that learners are also advised to read “Klingon for the Galactic Traveler” which explains the fictional race's culture through the language, as well as Okrand's other books such as “Conversational Klingon”.

The course will teach users essential Klingon grammar, the expert revealed, including the three plural suffixes it uses for different categories (beings capable of communicating, body parts, and everything else not covered by the first two). A screenshot from the new course. Photo: Duolingo

Along with being complex, the language is particularly blunt: the equivalent of hello, “nuqneh” translates literally as “what do you want?”. Duolingo even included some common insults, like “you are as incompetent as a topah” – “blthlb; toppa' Darur”.

A topah is a particularly incompetent animal in the Star Trek world, we are reliably informed.

While the world's first Klingon tourist centre was recently launched in Stockholm, and a society in Uppsala is responsible for an extensive Klingon-English dictionary, Malmenbeck said he hasn't found a particularly strong Klingon-speaking community in the country.

“Klingon speakers in Sweden have largely come to the language individually, but I suppose we do have the benefit of a very large share of the population being concentrated in a handful of cities, making it easier to meet up.”

“I have the benefit of having another Klingon speaker a mere hour's journey away, which is not a common luxury,” he concluded.

Perhaps Sweden's Klingon-speaking revolution is about to begin.