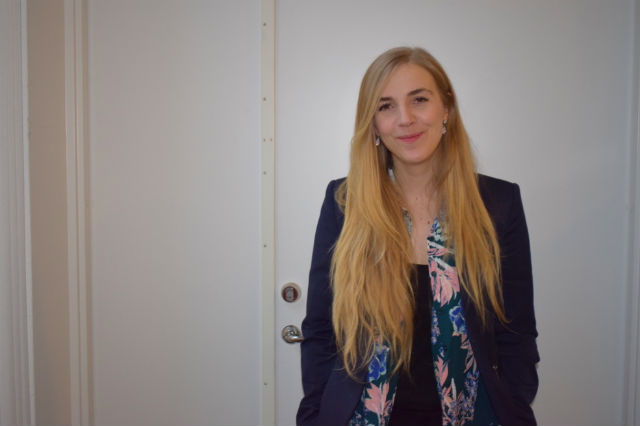 Tove Andersson describes herself as someone who gets “very excited about new ideas and innovation”.

It’s how the 28-year-old Swede first became interested in blockchain technology and cryptocurrencies, and what led her to found Facebook group KryptoGäris.

The group, which was set up before Christmas in 2017, already has over 1,500 members interested in connecting and learning more about blockchain and cryptocurrencies. But there’s one unique difference between KryptoGäris and other groups of its kind.

KryptoGäris is a forum exclusively for women and non-binary people. Its purpose is for members to teach each other about the burgeoning technology, as well as discuss it, share advice, and even meet up and make new friends who share similar interests.

“I started the group because I saw the potential for blockchain technology to redistribute power and I thought what a shame if it’s only men working on how to redistribute it. Then we risk the power being redistributed from one generation of men to another,” Tove tells SI News.

Tove explains that blockchain has the potential to replace the middle man which can disrupt and reshape many traditional industries.

Banks, for instance, have a lot of power as they maintain the financial system. In recent years, the credibility of the banks has been brought into question and that’s where blockchain has, as Tove puts it, the potential to “redistribute power”.

And by connecting more women and non-binary people through KryptoGäris and introducing them to the typically male-dominated blockchain scene, they can be part of the change.

But for those of you that don't already know, what exactly is blockchain?

Blockchain is a peer-to-peer maintained digital ledger, or a continuously growing list of records called blocks, which are linked and secured using cryptography. It is open source and can be used to record transactions between two parties in a verifiable and permanent way.

Bitcoin, a type of decentralised digital currency created in 2009, stores its transactions using blockchain which means that it is managed by a network rather than one central authority.

While bitcoin is the best-known application of blockchain, the technology can be used to build trust in nearly any transaction.

“It’s very early with this technology but I think more and more people will get involved with it,” says Tove. “We really haven’t seen the extent of the applications that could be built on it, like electronic cash registries but also land registries and voting platforms can become more secure and transparent.”

It may be early days, but with women like Tove encouraging other women and non-binary people to learn more about blockchain and explore its wide range of possibilities, the future of blockchain looks female.

“I want to continue developing KryptoGäris so that more people get inspired and communicate about blockchain and we start to get more diversity in this field.”