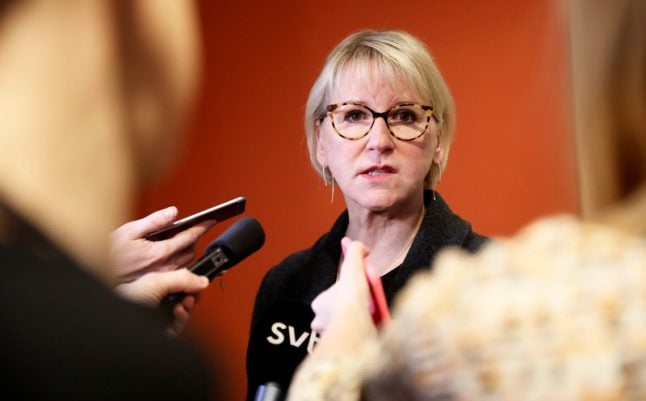 Foreign Minister Margot Wallström said the three-day talks with her North Korean counterpart had been "constructive". Photo: Sören Andersson / TT
The US citizens Kim Hak-Dong and Kim Sang-Duk were imprisoned in North Korea in 2017 on charges of “hostile acts”, while another American, Kim Dong Chul, has been detained in North Korea since 2015. He is serving a ten-year sentence for espionage.
During North Korean Foreign Minister Ri Yong-Hos's visit to Stockholm this weekend, Sweden “engaged heavily” on the issue of the American prisoners, according to unnamed sources who spoke with CNN.
READ ALSO: What exactly is Sweden doing in North Korea?
Erik Wirkensjö, the press secretary of Foreign Minister Margot Wallström, declined to provide details to news agency TT.
One of CNN's sources stated that Sweden did not issue an ultimatum during the talks but positioned the release of the American detainees as something that would “move things in the right direction”.
The issue of the American prisoners was also raised in the talks when North Korea's Deputy Foreign Minister Han Song-Ryol visited Sweden in January.
This weekend’s talks between Ri and top Swedish officials ended with with no indication their efforts cleared the way for a mooted nuclear summit between US President Donald Trump and Kim Jong Un. Although no concrete announcements came out of the Stockholm summit, Wallström said that the discussions had a “constructive atmosphere”.
North Korea’s state KCNA news agency said on Sunday the Stockholm talks had discussed “bilateral relations and other issues of mutual concern”, without providing further detail.
On Sunday, Choe Kang Il, deputy director for North American affairs at Pyongyang's foreign ministry, was seen at Beijing airport Sunday departing for Finland, where he is expected to hold talks with former US ambassador to Seoul Kathleen Stephens, multiple media reports said.
The flurry of diplomatic activity was set off when Trump agreed to a summit proposal relayed by South Korean envoys who met Kim in Pyongyang.

USA
Who’s the man in the red scarf at the US Capitol? Sweden wants to know
Url copied to clipboard!