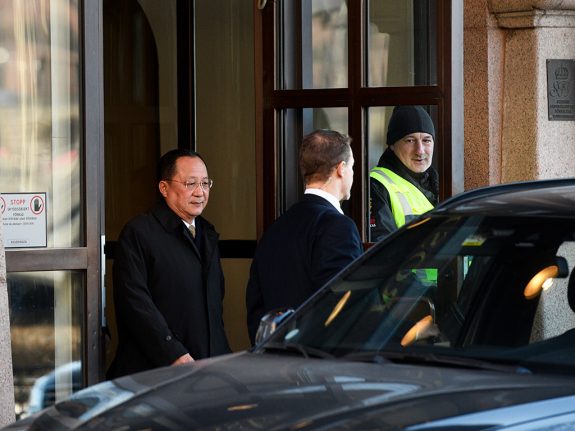 North Korean Foreign Minister Ri Yong Ho, seen in Stockholm on Friday. Photo: Vilhelm Stokstad / TT kod 11370
From Washington on Friday, Trump had called his South Korean counterpart Moon Jae-in, whose government last week passed an apparent summit invitation to Trump from Kim, which the US president accepted.
His response triggered a race to set a credible agenda for what would be historic talks between the two leaders.
Before a date or a venue for the summit can be set, North Korea will publicly have to confirm that it sent the invitation and intends to honour it, by attending a meeting to discuss giving up its nuclear arsenal.
In Stockholm, the Swedes were seeking to pave the way for talks which could end a threat of nuclear war, using the leverage of their longstanding ties with Pyongyang, where its diplomatic mission opened in 1975, the first Western embassy to be established in the hermit country.
The embassy today represents US, Canadian and Australian diplomatic interests, giving Sweden a key liaison role and facilitating the talks in Stockholm between Swedish Foreign Minister Margot Wallström and counterpart Ri Yong Ho.
Summit 'facilitator'
Ri also met with Swedish Prime Minister Stefan Löfven, who on Friday said Sweden hoped to be a summit “facilitator”.
Ri's delegation included Choe Kang Il, deputy director general of the foreign ministry's North America section — though a senior US administration official told AFP Friday: “No US government staff are meeting with the North Koreans in Sweden,” where Ri was stationed as a diplamat for three years in the mid 1980s.
Wallström had earlier said the talks extended into Saturday given the “constructive atmosphere” of the first two days.
No concrete announcements emerged Saturday, as the Swedish foreign ministry stated that “the talks focused primarily on the security situation on the Korean peninsula, which is high on the UN Security Council agenda.”
Noting Sweden's “consular responsibilities as a protecting power” for the United States, Canada and Australia, the statement indicated the “foreign ministers discussed opportunities and challenges associated with continued diplomatic efforts to reach a peaceful solution to the conflict.”
The ministry added that “Sweden underlined the need for North Korea to abandon its nuclear weapons and missile programmes in accordance with Security Council resolutions.” It also stated that “other discussions centred on the humanitarian situation in North Korea, sanctions, and regional cooperation and security issues for countries including South Korea, Japan, Russia, China and the United States.”
In line with previous sessions of talks, Ri made no comments to the media.
The Swedes added Ri also visited the Stockholm International Peace Research Institute global security think tank for “off the record” talks with chairman Jan Eliasson and other senior officials on the situation in the Korean peninsula.

USA
Who’s the man in the red scarf at the US Capitol? Sweden wants to know
Url copied to clipboard!