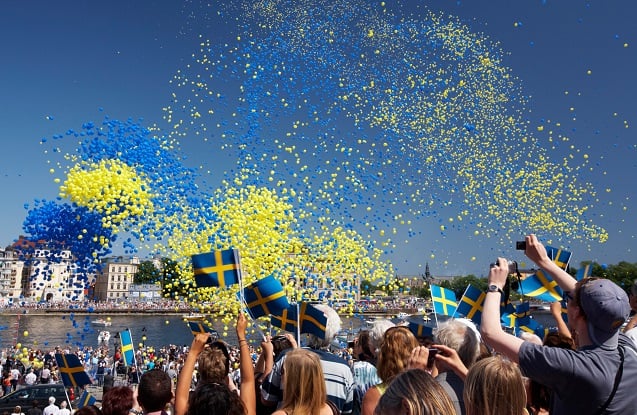 Sweden is home to a large international population, making it a real cultural melting pot. So where do its foreign residents come from, and where do they end up? Photo: Ola Ericson/imagebank.sweden.se

In total, there are 851,949 foreign citizens living in Sweden, according to the latest figures from Statistics Sweden (SCB), measured at the end of 2016. This includes people from all corners of the globe — around 200 different countries in total — with many of The Local's readers (and staff) among them. They may have moved for love, for work, out of necessity or just to try something new; here's a closer look at just where people in this group come from and where they end up.

The figure of 851,949 is made up of slightly more men that women: 460,659 compared to 391,290. And it doesn't include those who hold dual Swedish citizenship, which will account for a large number of immigrants to Sweden.

More of Sweden's foreign residents come from Europe than any other continent, with a total of 400,203 Europeans calling this Scandinavian nation home. That includes 130,127 from the neighbouring Nordic countries, a further 219,554 from other EU countries (excluding the Nordics), and 50,522 from the rest of the continent.

When it comes to looking at the individual countries, Syria is the most common country of citizenship for foreigners living in Sweden, with 116,384 Syrians calling the country home. This is followed by Finland (55,754), Poland (52,454), and Somalia (41,335), and neighbour Denmark rounds out the top five, with 35,210 Danes having crossed the border to settle down in Sweden. Just slightly fewer people (34,557) made the move from Norway.

Completing the top 20 countries by number of nationals living in Sweden are: the UK, China, Romania, Iran, Thailand, India, Lithuania, Turkey, the Netherlands, and Spain, with the USA in 21st place with 9,207 citizens in Sweden, SCB's statistics show.

This only gives us a glimpse of the full picture: in total, nationals of 193 different countries are registered as living in Sweden, proving its status as a truly multicultural location. On the map below, the 100 countries with the most nationals living in Sweden are marked.

Members of Sweden's foreign population are spread out across the whole country, although unsurprisingly, the majority live close to the three big cities. By far the most foreign citizens live in the Swedish capital, Stockholm, home to 248,288 foreign residents. This was followed by 133,063 in Västra Götaland (the county encompassing Gothenburg) and 127,177 in Skåne, where Malmö and Lund are situated.

MY SWEDISH CAREER: Interviews with some of The Local's pioneering readers

But even outside these hubs and in Sweden's more rural areas, there's no need to feel lonely as a foreign resident.

The next hub is Östergötland, home to 31,060 of the country's foreign residents. All but two of the remaining 17 counties count a similar number of foreign citizens, between 12,858 (in Blekinge) and 27,847 (in Uppsala). Jämtland in the northwest is home to 8,261 while Gotland off the east coast counts just 1,801 foreign citizens among its residents.

The map below shows how Sweden's foreign population is distributed.