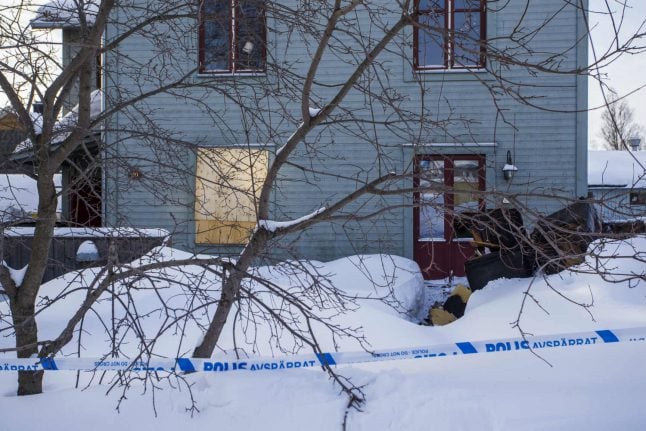 The building in Luleå behind a police cordon. Photo: Robert Nyholm/TT

The man was suspected of arson and attempted murder, reports TT.

Emergency services and police responded to alarms of a blaze at an apartment building in Luleå at around 6:30pm on Saturday.

A “serious situation” arose at the scene, according to police. A man in his thirties was shot and at around 11:30pm died of his injuries in hospital, police in Luleå confirmed.

“When he was shot he was suspected of attempted murder and serious arson at the property,” Johan Aitamaa of the police regional command told TT.

“We received information by telephone about what was happening at the scene, and that information, along with what happened after we arrived, caused us to suspect [the man],” Aitamaa added.

“I cannot release any more information at this time,” police spokesperson Peder Jonsson said to TT on Sunday.

The police were not the target of the attempted murder, which they said took place before they arrived at the scene.

“I don’t know exactly how many were involved, but the actual attempted murder was not aimed at the police patrol and occurred prior, while the apartment was on fire,” Aitamaa said.

A second person was taken to hospital with smoke-related injuries caused by the blaze. That person is reported to be one of the residents in the building to have raised the fire alarm, TT writes.

The fire was extinguished around an hour after the initial alarm, with the area around the building sealed for forensic examination.

The police decision to open fire will be investigated by the Department for Special Investigations (Avdelningen för särskilda utredningar), which is responsible for internal police investigations.