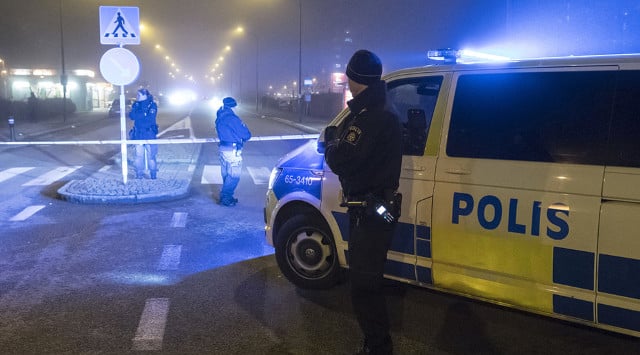 Police at the scene of a shooting in 2017. Photo: Johan Nilsson/TT

On Tuesday the Swedish Council for Crime prevention (Brå) released its lethal violence figures for 2017, with the body's definition of lethal violence including murder, manslaughter, infanticide and assault with a fatal outcome.

The 113 cases of lethal violence in 2017 was a new record for Brå's yearly reports on the figures since they started in 2002, and an increase of seven compared to 2016, when there was 106 cases.

The numbers include the five cases that were a result of the April 7th terror attack on Drottninggatan, Stockholm.

“Because the stats are regarding a smaller number (statistically speaking), an event with multiple victims significantly affects the statistics,” Brå investigator Nina Forselius explained to The Local.

The 2017 terror attack also had an influence on gender-specific figures: in 2017 a woman was the victim in 27 cases (24 percent) compared to 86 cases for men (76 percent). But if the terror attack is excluded from the stats, then the gender disparity sways even further towards men, who are overwhelmingly the most common victims of lethal violence in Sweden.

“The attack on Drottninggatan had the biggest influence on lethal violence against women, because the majority of the victims were female. Without that incident, the difference between men and women would have been even greater,” Forselius noted.

While we have your attention… a small request.
The Local has been giving you the story of Sweden for the past 14 years. But here's the thing: advertising revenues across the media industry – the revenues that keep us going – are more unreliable than ever.
That's why we're asking readers to become Members. For just 50 kronor a month you can get access to all The Local's articles, including articles written just for Members. We'll also invite you to special events and give you exclusive offers. At the same time you'll ensure The Local stays thriving into the future.
Become a Member here. Or find out more here.
—
From 2014 onwards the level of lethal violence in Sweden has reached a steadier, higher level. Gun violence is a particularly strong influence on that change.

“Firearms related incidents account for 35 percent in 2017, which is where the increase in recent years comes from,” Forselius said. That proportion is seven percent higher than the proportion in 2016. And in 2017, 16 of the cases of lethal violence involved more than one victim.

Asked if the increase in lethal violence and gun violence could be connected to gang crime, the Brå researcher noted that their statistics to not detail perpetrators. Police in Sweden are currently holding a weapons amnesty in an effort to get firearms out of the hands of criminals in the country.

READ ALSO: 800 guns handed in during one week of Swedish weapons amnesty

The stats also track geographic distribution of lethal violence, and show that most occurs in the concentrated population centres: 75 percent of 2017's lethal violence happened in the Greater Stockholm, West (where Gothenburg is located) and South (where Malmö is located) police regions.

But despite media portrayals of Malmö as the location of much of the violence in Sweden, the number of lethal violence cases in its South region decreased by 13 from 30 in 2016 to 17 in 2017.

IN DEPTH: Where Sweden's illegal weapons come from, and what the country is doing about it