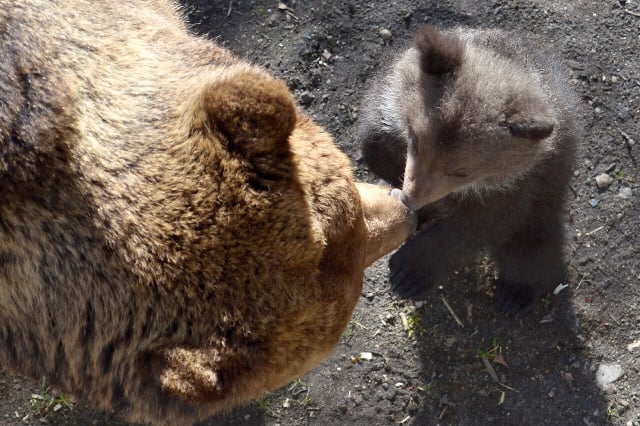 A mother bear with her cub at Stockholm's Skansen zoo. Photo: Janerik Henriksson/TT

The finding, published on Tuesday in the journal Nature Communications, was made by a team of international researchers who spent 22 years studying data on the reproductive strategy and survival of Scandinavian brown bears.

“Man is now an evolutionary force in the lives of the bears,” said Professor Jon Swenson from the Norwegian University of Life Sciences (NMBU).

In Sweden, Scandinavian brown bears — Ursus arctos — are heavily hunted and anyone can hunt without having a specific license, but bears in family groups are protected by law.

“A single female in Sweden is four times more likely to be shot as one with a cub,” said Swenson, one of the authors of the study who has spent more than 30 years working with one of the world's longest running research projects on bears.

Over the scope of the study, the researchers found that some female bears began to adapt their mothering tactics in order to increase their survival chances — the ursine equivalent of a human shield.

In that time, some mother bears extended the period of care from 18 months to 2.5 years.

“Generally, the cubs have followed their mother for a year and a half,” said Swenson, with the researchers finding no evidence of the longer care period before 1995.

But over the past two decades that has changed with more cubs now staying with their mothers for an additional year, thereby increasing the survival chances for both the mother and her offspring.

“As long as a female has cubs, she is safe. This hunting pressure has resulted in a change in the proportion of females that keep their cubs for 1.5 years in relation to those that keep them for 2.5 years,” the study found.

Between 2005 and 2015, the number of females keeping their cubs with them for an extra year rose from seven percent to 36 percent.

The extended caring period also slowed down the bears' life cycle, reducing their breeding possibilities as the females do not breed until their offspring are weaned.

Although shorter periods of maternal care provide more reproductive opportunities, the research found that this cost was offset by the higher survival rate among both the mothers and their cubs.

“This is especially true in areas of high hunting pressure. There, the females that keep their cubs the extra year have the greatest advantage,” Swenson said.

In Sweden, the hunting season starts in late August and runs to mid-October; between 2010 and 2014, hunters there shot about 300 bears per year.

In the 1930s, there were only about 130 brown bears in Sweden but following the implementation of a range of protective measures, the population recovered rapidly and by 2013 it stood at around 2,800.