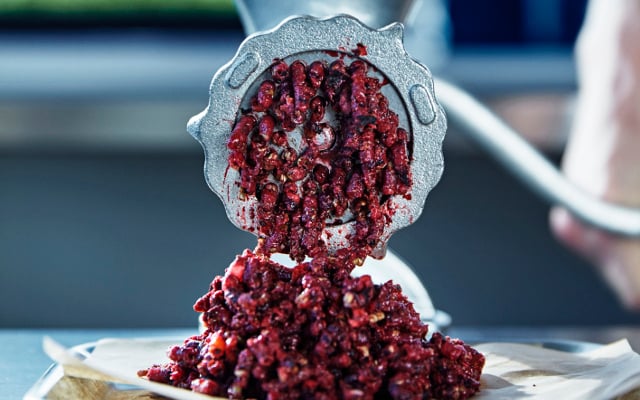 Mealworm burgers and meatballs are part of a test menu for Ikea. Photo: Space10

It may sound far-fetched, but the Swedish furniture giant – perhaps known around the world for its Swedish food staples as much as it is for flatpack items – tasked researchers at Space10 in Copenhagen with re-imagining their fast food menu for a sustainable future, and those were some of the concepts produced. 'Dogless' hotdogs with buns made from algae. Photo: Space10

Then there's the bug burger, made with mealworm patties topped off with beetroot and blackcurrant ketchup. “Feeling bugged out? You probably don't want to know what's really in your beef burger, chicken nugget or pork sausage,” Space10 noted in its press release explaining the food.

READ ALSO: No Swedish meatballs on the menu for Ikea in India

Perhaps most contentious of all is an updated version of the sacred Ikea meatball using mealworms instead of traditional meat. The idea is to promote alternative proteins and reduce meat consumption. The mashed potatoes and lingonberry sauce remain however, which should help appease purists. Meatballs made  from bugs. Photo: Space10

For the moment the adventurous dishes are no more than works in progress at the test kitchen, so you won't be able to buy bug balls after a hard day of shopping at your branch of the Swedish flat-packing giant in the near future at least.

The Artifical Meatball from our Tomorrow’s Meatball series—an  exploration of the many ways we could be eating in the not-too-distant future. What's your take on the unsustainable appetite for meat? ? Lukas Renlund #SPACE10 #tomorrowsmeatball #futurefood #artificialmeat

That said, society may be more willing to try the insects than some of the other concepts the researchers previously came up with for Ikea, including meatballs grown in a lab from artificial beef meat.