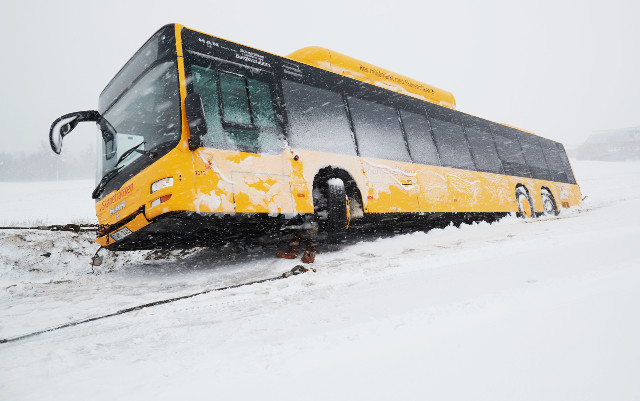 A bus that came off the road in southern Sweden. Photo: Photos: Andreas Hillergren/TT

In the four hours between lunchtime and 4pm a total of 18 accidents were reported to police in the South region, including two resulting in injuries, while 17 accidents had already taken place between 8am and midday.

Several heavy vehicles drove off the road on the E6 route between Trelleborg and Vellinge in Skåne on Thursday, including trucks and a bus, while some cars also skidded into the central reservation.

Part of the E6 was closed off as a result, while a section of a road between Ystad and Tomelilla also had to be partially closed as a truck blocked the path.

A further truck accident occurred at the southern entrance to Landskrona, while a bus drove into a ditch near Simrishamn at lunchtime due to a strong crosswind.

Vehicles vulnerable to high winds are recommended to avoid driving over the Öresund Bridge between Malmö and Copenhagen while the bad weather continues.

And it doesn't look like the spring weather will be back any time soon in the region, as national forecaster SMHI has a class one warning (the least serious on a scale from one to three) in place for snowfall and wind over Thursday evening in Skåne.