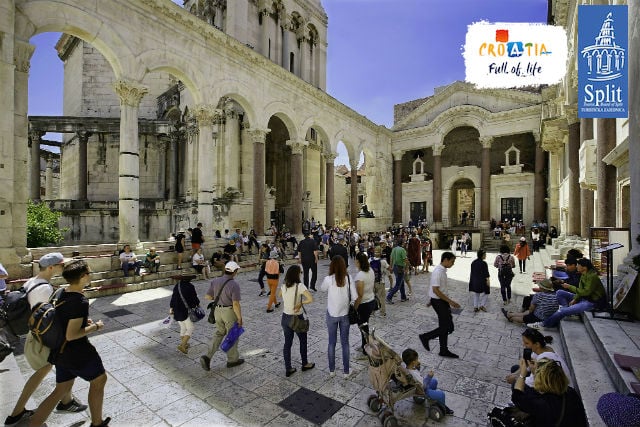 It’s no wonder that it was named the best Croatian destination of 2017.

Split’s history spans no fewer than 17 centuries, since the Roman Emperor Diocletian — a Croat himself — built his retirement palace on the peninsula near Salona, once the capital of the Roman province of Dalmatia.

A city emerged in and around the palace, and miraculously it’s still there today. In fact, it forms around half of Split’s modern-day Old Town. In 1979, Diocletian’s Palace and the city’s historic centre were added to UNESCO’s World Heritage List.

Needless to say and cliché as it sounds, walking through the ancient city is like stepping back in time. The tiny lanes are packed with nooks and interesting crannies, pop-up shops sprout up this way and that, street performers weave their way around sauntering tourists.

The mark of a great holiday destination, though, isn’t just in its culture, climate, and attractions. It’s also in the cuisine, and there’s no shortage of places to refuel in Split.

The city offers a wonderful taste of Dalmatian seafood, restaurants serve up superb pasta dishes and risotto, and there’s a great selection of pizzerias (after all, Split is just a stone’s throw across the Adriatic Sea from Italy).

One sip of Croatian wine too, and you’ll be wondering why it isn’t already a staple in your wine rack (in part, because it’s rarely exported — so you better drink your fill while you’re there).

Sports fans can also get their kicks while in the city: Split is Croatia’s capital of sport, with the names of more than 70 Olympic medal winners immortalised on the Olympic Walk of Fame on the seafront.

If you want to get away from the hubbub of the city, the Marjan forest park has kilometres of paths which you can stroll, hike, cycle, or even go for a cross-country run.

There’s also a seven-month swimming season in Split, lasting from April until late October. Escape for a day at the secluded shingle oasis at Marjan or take a dip at bustling Bačvice with its stretching shoreline just 500 metres from Diocletian’s Palace.

Beyond Split, there are no fewer than eight UNESCO sites within two hours of the city by ferry, bus, or car. Two more: Plitvice Lakes National Park, a spot of exceptional natural beauty, and Dubrovnik, or ‘King’s Landing’ to fans of HBO’s Game of Thrones, are also within a day’s travel.

More adventurous travellers can hike nearby mountains Mosor, Kozjak, or Biokovo; raft or cycle around the rural and spectacular Dalmatian Hinterland; or dive into crystal clear waters off neighbouring Dalmatian islands. It’s an expansive area of untouched beauty that ticks all the active traveller’s boxes.

Events throughout the year

Not a week, or even a day, seems to go by in Split without an event of some kind.

May is marked by Saint Domnio’s Day, a city-wide celebration of Split’s patron saint. The whole town comes out in droves to salute the Christian martyr with a grand and moving procession around the Old Town, culminating at the oldest cathedral in the world, once Diocletian’s mausoleum.

Summer in Split kicks off in June with the Mediterranean Film Festival, an annual review of the best films to come out of the region. It’s the rare chance to discover films you may otherwise never have seen, and to watch them at the open air cinema next to the Bačvice Beach in the heart of a pine forest.

Tens of thousands of young people make the pilgrimage to Split in July for Ultra Europe Festival, one of the biggest music events in Europe. Some of the top names in electronic music take to the decks, with every club and bar in town getting in on the action.

If electronic music isn’t your thing, the Split Summer Festival from mid-July to mid-August, with its theatre, opera and ballet performances, concerts, and exhibitions, may be more up your street.

Towards the end of August, ancient history enthusiasts can immerse themselves in the days of Diocletian as Roman legions line the city streets, and the Emperor himself (*ahem*) parades through the town and greets the crowd. So take your own toga and experience a snapshot of what life looked like in Split nearly 2000 years ago.

The season ends in October with Split Film Festival, a presentation of arthouse films, installations, performances, retrospectives, and discussions taking place across the town.

All good things must end and even in Split the summer doesn’t last all year long. But that doesn’t mean the city goes into hibernation.

Split lights up with Advent celebrations in the weeks leading up to Christmas; fairs and concerts, folklore performances, and gastronomic events pepper the city throughout December.

If you’re a fan of a white Christmas, prepare to be disappointed. The average temperature in December hovers around a not entirely unpleasant 15 degrees.

From Scandinavia to Split

Seasonal flights to Split from Scandinavia start in March, and by June are in full swing. SAS has announced that, in high season, there will be no less that 80 flights a week to Split departing from Aarhus, Bergen, Copenhagen, Gothenburg, Kristiansand, Oslo, Stavanger, Stockholm, and Trondheim. Additionally, the airline is collaborating with charters from Apollo, Ving, and TUI.

Norwegian Air, too, flies to Split from Copenhagen, Gothenburg, Oslo, Helsinki, Stockholm, Trondheim, Haugesund, Bergen, and Stavanger. Croatia Airlines has also announced a timetable of weekly flights from Copenhagen to Split, while any Finns out there can hop on a Finnair flight for their Croatian fix.