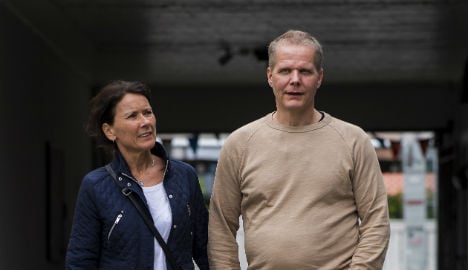 Kay Linna with girlfriend Petra Wüllrich shortly after his release. Photo: TT
When Kaj Linna was found innocent by the Swedish Court of Appeal and released last June, it was a huge victory, both for him, and for Swedish journalists Anton Berg and Martin Johnson, whose Spår, meaning ‘trace’ or ‘evidence’ podcast, helped reopen the case.
His lawyer Thomas Magnusson told the Expressen newspaper that  Sweden’s Chancellor of Justice had agreed the sum on Good Friday.
“This is a Gentleman’s agreement,” he said. “The negotiations have taken place behind doors between Kay Linna and the Chancellor. Kay Linna has accepted the officer and is satified with that compensation level.”
In the days after Linna’s release Magnusson said he aimed to win between 20m and 25m kroner for his client, who is now living on the Canary island of  El Hierro with his wife Petra Wüllrich, who was his Spanish teacher in prison.
Linna was found guilty in 2004 of murdering a man in Kalamark, outside the city of Piteå in northern Sweden during a robbery.
The sole evidence tying Linna to the crime was the testimony of
Mr Linna was initially sentenced to life in prison in 2004 for the brutal murder and robbery of Robert Lindberg, in an attack , which also left his brother Sune injured.
Sune, who was found by social services two days later, told police he had recognised the voice of a man who had previously done business with the brothers.
That man, who had an alibi, instead mentioned Linna as a potential suspect and pointed police in the direction of another man who had more information, reported Swedish media last year.
That man then became the main witness at the trial and said Linna had told him of plans to rob the brothers.
Linna was then found guilty, even though evidence from the man’s mobile phone showed that he had not been where he had claimed to be at crucial moments.
When Anton Berg and Martin Johnson interviewed the man for their podcast, he then gave a very different story from the one he had given in court.
Berg and Johnson’s audio was submitted to the court as evidence to push it to reopen the case.
Url copied to clipboard!