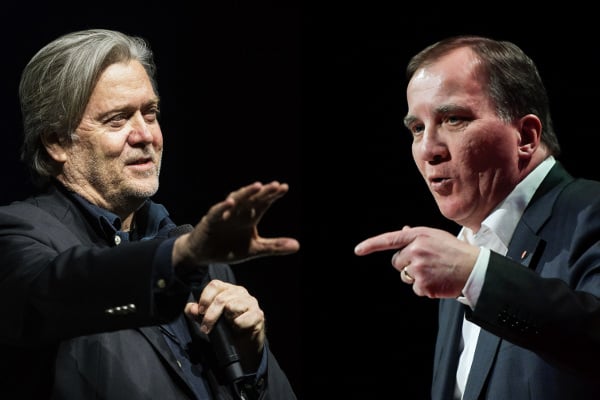 When Steve Bannon visits Sweden in the spring – if indeed he does – he will presumably hole up in a Stockholm hotel to receive like-minded anti-establishment conservatives and plot Trumpian tumult in northern Europe. The Sweden Democrats have said that meeting Bannon isn't top priority but someone will show up for him, just in case.

The conversation will turn to the election in September and how the distorted international image of Sweden as a country in crisis can be turned on the nation's voters to persuade them to return a populist-dominated government.

The news outlet Bannon used to run, Breitbart, has long been one of the main purveyors of an image of Sweden in crisis, consistently painting a bleak picture of riots, rape and ruin. But as Breitbart's audience shrinks, far larger and more mainstream news brands are picking up the theme and running with it. The New York Times recently gave the political-correctness-gone-mad theme a boost with an article about Sweden's gender-blending pre-schools, while the Times of London declared that teens with rifles were 'roaming' the country's streets.

What's remarkable about the 'Bad Sweden' narrative is not that it is so compelling, but that it has gone unchallenged by Swedish politicians for so long.

In the five years since the Stockholm riots of 2013, Sweden's politicians have had countless opportunities to challenge this wave of negativity. That was the point at which the 'Good Sweden' story being told by the world, in which all is perfect up here in the land of ABBA, Ikea and Volvo, was elbowed aside by a new, negative story about the place.

For five nights, there was unrest in the Swedish capital's suburbs and suddenly the country's detractors had a new story to tell about Sweden: somewhere in the ashes of the riots, paradise was lost. It wasn't what was happening; it was where it was happening. The socialist experiment had failed. Multiculturalism was a disaster. Political correctness collapses, a victim of its own spinelessness.

In fact, only 29 people were arrested for causing damage costing 63 million SEK, compared to 3,000 people arrested in England during riots two years earlier which caused 2 billion SEK worth of damage. But the international media unleashed the hounds of schadenfreude.

If a few of Sweden's most erudite English-speaking politicians had ridden out beyond the country's borders to meet the international media charge in 2013, perhaps they could have stopped this negative narrative dead in its tracks. They could have challenged the hyperbole. Put matters in context.

Perhaps they were focused on the national debate at the time, which was fierce. Perhaps they were simply unaware that the world had starting talking about their country in very different terms. Or perhaps they just didn't care: not their voters, after all.

Five years later the 'Bad Sweden' narrative has developed its own layered mythology (including the banning of Christmas lights in Jönköping and Malmö as the rape capital of Europe), with locations such as Rosengård and Rinkeby attaining a global infamy. News outlets like Mail Online and Fox News use Sweden as their go-to examples of the dangers of political correctness. Politicians such as Nigel Farage continue to add to the mythology while milking it for their own ends.

And still Sweden's politicians fail to engage, fail to answer the accusations being made against their nation. Maybe they just think that The Local will do it for them. But most likely they still don't realise that by ignoring the international debate about Sweden they are ignoring the concerns of their own constituents.

Swedes consume international media more than ever before and thanks to social media, articles about Sweden published in New York, London or Berlin are only a share away.

Facebook and Reddit are the fourth and fifth most popular web sites in the country, while Omni, a news sharing app, is as likely to link to international news sites as Swedish sites. Mail Online, which in 2016 was accused by Sweden's embassy in London of running 'a campaign against Swedish migration policy' has over 800,000 monthly readers in Sweden. That's more than most Swedish news sites.

See also: 'When a US president speaks about Sweden, the fallout can last a long time'

To abuse geology for the sake of a metaphor, Sweden is no longer an island. News flows out of the country, gets decontextualized and reshaped to suit the agenda of whichever news outlet picks it up, and then flows back in through social media to influence Swedish voters.

Only the Sweden Democrats seem to have understood this. They were the quickest off the mark last year when President Trump referred to 'last night in Sweden', securing a lead spot in the Wall Street Journal to cheer his statement. Within hours of Stefan Löfven's press conference with Donald Trump in March, Jimmie Åkesson gave an 'exclusive interview' to Breitbart, describing Löfven's rejection of the term 'no-go zones' as fake news.

Meanwhile, the rest of Sweden's politicians stand silently in the corner, having the usual conversations with the usual crowd, vaguely aware that the strangers on the other side of the international media room are badmouthing them. But even as their audience drifts away towards the charismatic strangers across the room, even then the country's politicians don't dare to speak out.

They may not want to set themselves up for a fall by talking to Fox News or Mail Online but there are hundreds of other news outlets for them to engage with. Hundreds of other newspapers whose readers would be interested to hear a nuanced story of modern Sweden and whose Facebook shares would find their way back to these shores.

Steve Bannon's visit will bring the Bad Sweden narrative to the top of the agenda. The international media will report on it, as they reported on his trip to Italy before that country's recent election. As the election looms here and Sweden's political parties are considering where to engage with their voters, they will ignore the international English-language media at their peril.

Paul Rapacioli is the co-founder of The Local and author of the book Good Sweden, Bad Sweden, an analysis of how and why the country's reputation is changing in a post-truth world.

Where to buy Good Sweden, Bad Sweden in Sweden

Where to buy Good Sweden, Bad Sweden in the US

Where to buy Good Sweden, Bad Sweden in the UK