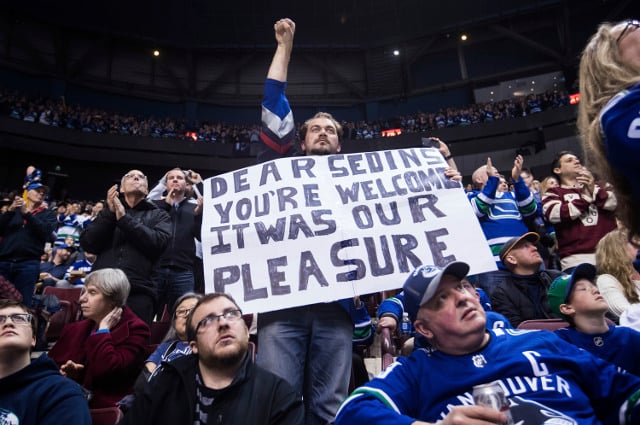 The Swedish twins made sure their send-off ended with a bang as Daniel scored the winner on a setup from Henrik to lift the Canucks to a 4-3 victory over the Arizona Coyotes.

The dynamic duo combined for two goals including the winner at 2:33 of overtime on the powerplay as Daniel fired a shot home from the point after receiving a nifty pass from his brother.

It was the perfect send off for the 37-year-old twins from Ornskoldsvik, who announced their retirement on Monday and received several standing ovations from the Canucks fans throughout Thursday's contest.

They were mobbed by their teammates after scoring the winner as the standing room only crowd of 18,865 at Rogers Arena went into a frenzy.

Vancouver rallied from a 3-1 deficit by outshooting Arizona 15-0 in the third period.

Daniel scored the Canucks' first goal early in the second, finishing off a nifty three-way passing play to make it 1-1. The twins have combined on 745 goals during their 17 seasons together, all with Vancouver.

The brothers were the first players on the ice during the pregame warmups. Prior to the game the front office put together a video tribute where former Canuck players and coaches talked about the Sedins' legacy, which includes their contributions to the team and the community.

The Sedins will play the final NHL game against the Edmonton Oilers in Alberta on Saturday.

The game was epic for one other reason as the 50/50 draw ended up topping C$1 million (US$783,000) with the lucky winner taking home half the jackpot tax free.