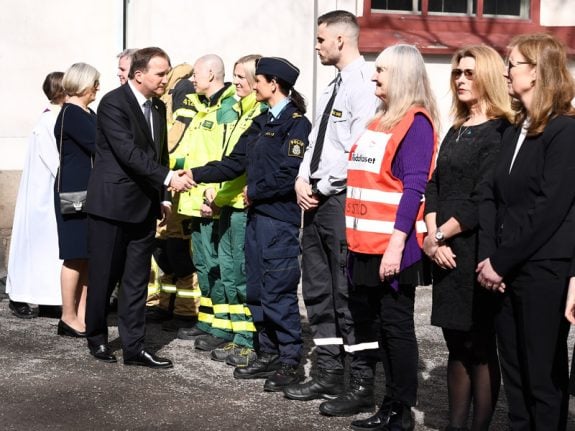 PM Stefan Löfven thanks first responders after Saturday's memorial service in Adolf Frederik Church. Photo: Claudio Bresciani/TT
Prime Minister Stefan Löfven, speaking at a memorial concert in Kungsträdgården, addressed both the family members of the victims and the Swedish people as a whole.
“It has been a year of sorrow and absence but amidst all of that I also understand that you carry your bright memories and all of that which created love,” the PM said.
“I hope those of you who are mourning can feel the love, support and solidarity of the entire country. We are here for you. You are not alone,” Löfven continued.
Saturday marked exactly one year since Isis sympathizer Rakhmat Akilov stole a large beer truck and drove it down the capital's busy street Drottninggatan last year, mowing down people in his way.
READ ALSO: Sweden's security police alerted to potential terror plans 'every other day'
The prime minister used his brief speech to thank the first responders, police officers, healthcare workers and volunteers who stepped up in the aftermath of the attack.
“You have shown what a sense of duty, sacrifice and courage mean. You are a source of pride for our nation,” Löfven said.
The prime minister also took part in a service in Adolf Fredrik Church in central Stockholm that was only open to invited guests. Also attending were Carl XVI Gustaf and Queen Silvia.
Reverend Annika Millde opened the service with these words:
“It was a day when many lives changed forever. Many still carry the sounds, smells and images that remain. For those of us who go about our daily lives here on Drottninggatan, as well as those who visit, the street has not been the same during the year that has passed.”
“We saw the street become the scene of a disaster, then saw it fill with sorrow, flowers and compassion. Eventually we tried to make it our street again,” she continued.
At the close of the church ceremony, several candles were lit and described as the lights of hope. They were carried out of the church by police officers, nurses, ambulance staff and others.
Akilov has confessed to terror crimes and his trial is expected to conclude in May. Meanwhile, the deputy dead of Sweden’s security police Säpo told The Local in an interview earlier this week that potentially violent extremist movements are still growing in Sweden.
“We're seeing, as we have flagged up before, a growing extremism environment with violent Islamist ideology as well as political extremism in the form of autonomous (far-left) and white power environments,” he said.
Some 3,000 violent extremists are thought to be based in Sweden, of whom around two thirds are believed to have Islamist motives. The others are mostly made up of political extremists with connections to either far-right or far-left movements.