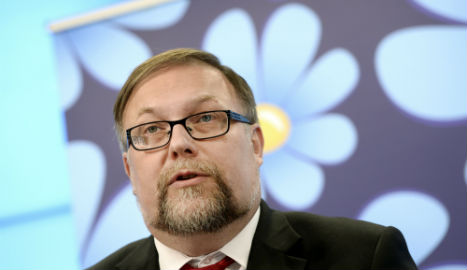 Mikael Jansson led the populist party for a decade until he was replaced by the then 25-year-old Jimmie Åkesson in 2005. He said he hoped to lead the push to get the new party over Sweden’s four percent parliamentary threshold in September’s election.

“My work for Sweden will now continue at the same rate. I'm going to do my utmost to make sure Alternativ för Sverige takes its place in the parliament,” he said in a statement put out by the new party on Monday.

In a press conference, Jansson said that his move had been influenced by the Sweden Democrats' considering dropping its opposition to Sweden joining NATO.

MORE ON THE SWEDEN DEMOCRATS:

Mattias Karlsson, group leader for the Sweden Democrats in the Swedish parliament, downplayed the significance of Jansson's departure, saying that he had failed to be selected as a possible MP for the next term at the party’s annual conference, and had also been rejected as a potential city council candidate in his home city of Gothenburg.

“In light of that I don't think it’s very surprising that he's taking this course of action, although it's sad, because he’s betraying his voters and the party,” he told The Local. “To stay on as an MP and to block that seat, although he doesn't have any democratic right to it is not the moral thing to do.”

As chairman, Kasselstrand came into open conflict with Åkesson, calling for him to resign as party leader. The disgruntled Sweden Democrats then in 2015 split from the party's own youth wing, and launched a replacement organisation, Ungsvenskarna, or The Young Swedes.

Jansson's defection to Alternative for Sverige follows that of two other Sweden Democrat MPs, Olle Felten and Jeff Ahl.

“I don't see them as a serious threat at all. The leadership is very radical and I think that will show itself in the coming months,” he said.

“That was also the reason why we kicked them out of the party, and the people they've recruited from us are only people that we didn't really want any more.”