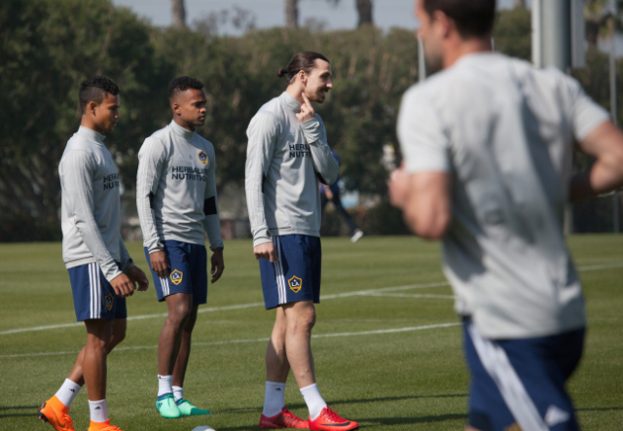 The Galaxy were hoping for another miracle late finish by Ibrahimovic who gave his team a lift when he finally entered as a substitute in the 62nd minute, but couldn't erase Sporting's two goal lead.

Before the game Ibrahimovic had warned Galaxy fans not to expect a repeat of his remarkable debut last week.

The Swedish superstar made a sensational start to his Major League Soccer career last week, scoring twice after coming on as a late substitute in the Galaxy's 4-3 comeback win over Los Angeles FC.

There were no fireworks this time around, but the 36-year-old striker did create some scoring chances including one where his playmaking helped lead to a shot off the woodwork. There were other close calls but each time goalkeeper Tim Melia came up with the clutch save.

Hungarian Salloi opened the scoring by collecting a loose ball in the penalty box and blasting it past Galaxy keeper David Bingham for first place Sporting who improved to 4-1-1 on the season.

Scotland's Russell celebrated his 28th birthday by dancing through the Galaxy defence pair of Ashley Cole and Daniel Steres and then poking it past a startled Bingham.

READ ALSO: 'I heard the crowd saying we want Zlatan, so I gave them Zlatan'