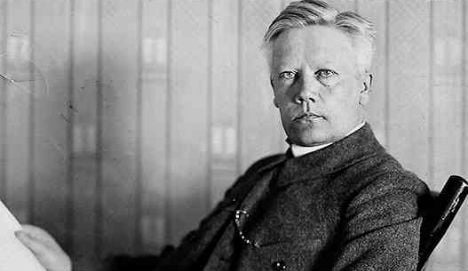 Professor Herman Lundborg was the first head of Sweden's State Institute of Racial Biology at Uppsala University. Photo: Nordstedts Förlag
At least 150 students were subjected to skull measurements at school, in experiments apparently based on the now-debunked pseudoscience of craniometry, which was used as a way of classifying different races.

These tests took place at schools in 14 different villages, according to the study which was based on interviews with 30 Tornedalian pensioners. It was presented to Culture Minister Alice Bah Kuhnke on Monday.
Tornedalians come from Tornedal, a region which straddles the Finnish border at the far-North of the Gulf of Bothnia, and speak the Meänkieli language, which is related to Finnish.
The group is the third largest minority group in Sweden, with 50,000 members living in Sweden. That compares to 20,000 to 35,000 Sami, 50,000 to 100,000 Roma, 20,000 to 25,000 Jews and 450,000 to 600, 000 Swedish Finns.
“One of the most remarkable findings in our study is the fact that skull measurements were still being carried out on schoolchildren as late as 1951,” Bengt Niska, chairman of the National Association of Swedish Tornedalians, told Swedish broadcaster SVT after meeting Bah Kuhnke in Stockholm. “So, six years after the fall of Hitler's Germany.”
READ ALSO: Why is what happened to the Sami not common knowledge?
Curt Persson, a historian based at Luleå Technical University who carried out the study, stressed that the experiments were not part of Swedish government policy.
“It was the teachers who did it. It was a personal interest,” he explained. “They all did a course at Uppsala University called Physical Anthropology, which was where they learned to do it.”
Persson said that at the time the measurements were being carried out, few Tornedalian pupils understood what they represented.
“When they were small children in school, they didn’t know what it was, and the parents didn’t reflect on it. They thought it was an ordinary school examination,” he said.
“Now, more and more people are phoning me, saying ‘I got my skull measured in this year or that year’,” he said. “In Uppsala they still taught this course in 1961, so I think that teachers in the villages could have done this into the 1960s.”
READ ALSO: Sweden's 'dark legacy' draws crowds to museum
Persson said the problem was not the experiments themselves, but the fact that many teachers would have judged pupils on the results.
“The bad thing is when you start to sort people into lower and higher degrees because of the shape of the skull.”
He said the Tornedalians he interviewed also spoke about the punishments they received at school if they spoke the Meänkieli language.
He noted that Sweden’s Sami minority had become politically active much earlier than the Tornedalians.
“The Sami people started to rise up about this earlier,” he said. “Tornedalians were quiet until the 1990s. It was a kind of shame. You don’t talk about the fact you have been subject to this kind of thing.”
After the meeting with Bah Kuhnke, Niska said he would like Sweden to launch a commission to study historic racism against Tornedalians.
“Why not have a truth and reconciliation commission?” he asked.
Persson said he thought such a commission was unlikely.
“I don’t think the state will do it,” he said. “The Sami people have been calling for this for 30 to 40 years and it hasn’t happened.”
However, Bah Kuhnke said Sweden's government would certainly act on the report.
“There are terrible stories that have not been easy to take in, but I think we need to do it,” she told SVT. “And as a representative of the Swedish state and as part of the Swedish government, I feel we will.”
READ ALSO: Sweden needs to face up to colonial past