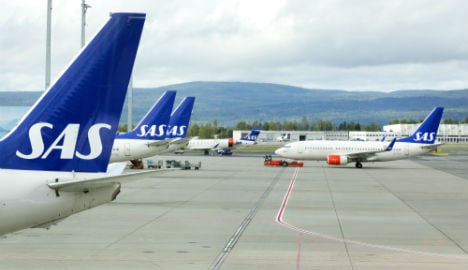 SAS planes in an airport in Norway. Photo: Gorm Kallestad NTB/Scanpix/TT
Thirty-five of the planes will be bought directly from Airbus. They have a list price, before discounts agreed between SAS and Airbus, of just under $4 billion (3.2 billion euros), the airline said in a statement. The other 15 aircraft will be leased.
SAS already has 17 Airbus A320neos in service from a previous order for 30 Airbus A320neos. The new order means SAS will have at least 80 Airbus A320neos in service by 2023, SAS said. The purchase will enable it to have a single-type fleet by 2023.
The leased planes will be delivered from the spring of 2019 through 2021, while the remaining 35 are scheduled to be delivered directly by Airbus by 2023.
In a bid to reduce costs, SAS has in recent years aimed to simplify its fleet. It now has two aircraft types in service within Europe, compared to six in 2012.
“In line with the deliveries of the new Airbus A320neos, SAS will begin phasing out its Boeing 737 and the existing Airbus A320 aircraft,” it said.
The order also includes options for an additional five A320neos, the carrier said.
After experiencing several challenging years amid fierce competition from low-cost rival Norwegian Air Shuttle, SAS is now on the mend.
At the end of its fiscal year in October, the company posted a pre-tax profit, excluding one-off items, of almost 2.0 billion kronor ($239 million, 196.7 million euros).