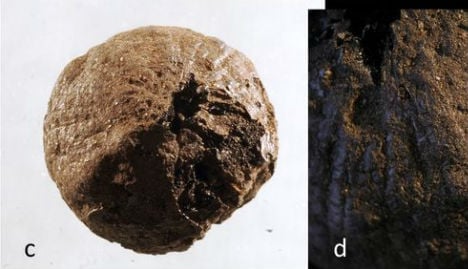 The ancient bulb found at Sandby Borg on the island of Öland shows that trade with Rome went far beyond the gold coins and jewellery previously found at the site, extending to what would have then been considered an exotic vegetable.

“What it means is that people on Öland imported food as well,” Helena Victor, project leader for the excavation, told The Local.

“They didn't use onions in Scandinavia in cooking, but they did use them in the Roman Empire. I think it must have been imported. They probably saw it as some unique extra spice.”

The discovery was made near an old fireplace during the excavation of a house in the ring fort.

“It looked like a big nut or something and initially we couldn’t tell what it was,” Victor explained.

MORE SLICES OF SWEDISH HISTORY FROM THE LOCAL: But after it was sent for analysis by Jens Heimdahl at The Swedish History Museum, it was identified as an onion, the oldest found yet in Scandinavia.

“An onion doesn't sound very interesting,” Victor said. “But the previously oldest onion in Scandinavia was found on Bornholm and it was dated to 650 AD, and this onion was from the end of the fifth century, so it's almost 300 years older.”

The settlement at Sandby Borg came to an abrupt end at the culmination of the fifth century when its inhabitants were massacred in what Victor describes as “a murder mystery story”.

“We are using forensic methods on the victims, because they are murder victims,” she said. “We think it was the result of a civil war on the island.”

Roman gold rings and coins discovered at the fort late last year could also be a motive.

“This discovery could help explain why the massacre took place – maybe these people had too much gold and jewellery,” Victor told The Local at the time.

But she said the onion was more important for the evidence it provided of links with the Roman Empire, whose closest major settlement Noviomagus, now Nijmegen in the Netherlands, was more than 1,000 km away.

“We can see this direct link, again, with Europe and the Roman Empire. We find things all the time that show this link, but we haven’t seen it in food before,” she said.