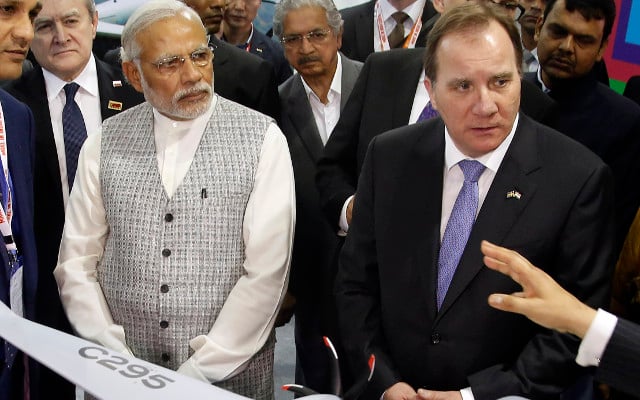 Business and trade are the main themes of Modi's visit to Sweden on April 16th-17th, and the signing of a new innovation partnership agreement is one of the items on the agenda, according to the Times of India.

India and Sweden are also set to sign a general security agreement which would have an impact on trade, the newspaper reports, as it would allow Sweden to share sensitive technology with India if for example Swedish company Saab is chosen to build fighter jets there.

The Indian leader's agenda includes an audience with Sweden's King Carl XVI Gustaf on the morning of April 17th. Afterwards he will have a private meeting with PM Löfven before moving on to roundtable discussions with businesses.

MORE FROM THE LOCAL ON INDIA-SWEDEN RELATIONS: The Vikings travelled remarkably far but could they really have made it to India? Photo: Jacob Hamilton/AP

Finally, on Tuesday evening a Nordic-Indian summit will take place including the leaders of Denmark, Finland, Iceland and Norway alongside PMs Modi and Löfven. It is unusual for the leaders of all five Nordic countries to hold a summit with one country, with the last occurrence being a 2016 meeting in Washington DC with then US President Barack Obama.

Sweden has been on a charm offensive towards India recently, supporting Modi's key “Make-in-India” manufacturing summit with Löfven leading a delegation of Swedish industry leaders to the launch event in 2016.

India is also an increasingly important market for Sweden, with more than 160 Swedish companies now established in the country, including Ikea and H&M who are both expanding there.

INDIA
UPDATED: When will Indians be allowed to travel to Sweden again?
Url copied to clipboard!