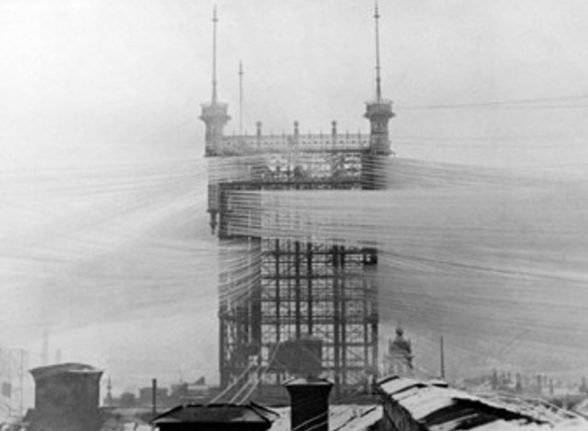 This image of Telefontornet from 1890 has gone viral and regularly spreads on social media. Photo: Public Domain

Telefontornet (“the telephone tower”) once dominated Stockholm's skyline, and had it survived it would surely be one of the more iconic landmarks in the city even today. The structure was built to connect the roughly 5,500 phone lines in Stockholm at the end of the 1800s, when Sweden had one of the most elaborate telephone networks in the world.

Construction was first completed in 1887, but was further expanded a few years later in 1890 with the addition of decorative corner towers topped with flagpoles. This was an effort to appease residents who complained that the structure was ugly.

The final height was a not insignificant 47 metres, and its location on the central Malmskillnadsgatan near the corner of Hamngatan would have made it a dominating presence in the city at a time before high-rises and skyscrapers.

“Some Stockholmers said it was so tall it blocked out the sun,” 90-year-old Karl-Väinö Tahvanainen, who worked on the tower told newspaper Svenska Dagbladet (SvD) in 2012. Telefontornet and its thousands of wires pictured in 1892. Photo: Tekniskamuseet/Flickr Creative Commons

The most commonly shared image of the tower on social media shows it performing its basic function of connecting thousands of phone lines well above the rooftops of smaller buildings below, but when Sweden switched approach to burying lines underground in the early 1900s it became obsolete in that capacity.

The tower also briefly served a different, particularly Swedish function, with special flags being raised to let residents know when there was a big catch of herring at Stockholm’s harbour.

“A herring flag was then raised. But they had to stop that because Stockholm's housewives bargained the price down too much when they found out there was overstock of herring,” Tahvanainen explained. Telefontornet was given its final lease of life in 1939, when a clock that was at the time Europe's biggest in terms of diameter was added to the top, helping Stockholmers to stay punctual without a watch.

Just over ten years later, disaster struck. In 1952 a fire broke out at the Televerket radio laboratory housed underneath the tower, which in turn spread to the structure and weakened it severely. Judged to be a safety hazard with the potential to topple, it was demolished in 1953, putting an end to one of Stockholm's most unique-looking buildings.

One part of the structure did fare better in the long run however. The clock which once sat at the top survives to this day in its new home, on top of the NK department store on Hamngatan, and is now an iconic presence in itself even if many are unaware of its origins. Telefontornet's clock in its new home, above the NK building on Hamngatan. Photo: Leif Blom/TT

READ ALSO: Why a Swedish gift to Barcelona is still causing a fuss 90 years later