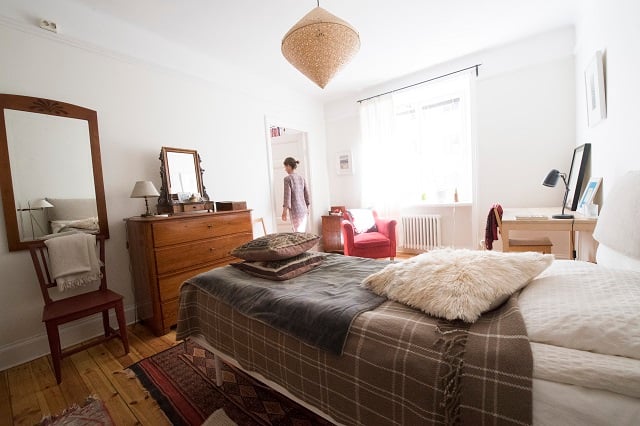 Single-person households are the most common type of household in Sweden. Photo: Fredrik Sandberg/TT

In 2017, 1.8 million people in Sweden lived alone, representing 39.2 percent of all households (and 17.8 percent of all people), a proportion that has barely changed since 1990.

It's tempting to use this fact to back up the image many of us have as Sweden: a big, cold country where no-one makes small talk and personal space is fiercely guarded. The cry of “I want to be alone!” from Greta Garbo's character in the film Grand Hotel is often used to sum up the Swedish love of solitude – but the story of why people are more likely to live alone in Sweden than anywhere else is much more complicated than that.

Swedes do tend to place a great deal of importance on independence, and that living alone is a part of that. One proverb states 'ensam är stark' (alone is strong).

“In the majority of cases, living alone is a temporary phase, not a lifestyle choice,” Gunnar Andersson, a professor in demographics at Stockholm University, tells The Local. “Looking at the data, the proportion of single households isn't stable across different genders, income groups, or ages.”

There are two main phases when living alone is particularly common: in early adulthood (age 19-30), between moving out of the parental home and moving in with a partner, and in retirement (over age 65), when married people may become widowed.

There's also a gender split. Single households are made up of roughly 53 percent women and 47 percent men, with women over-represented among the older age groups and men among the younger. This fits in with the demographic trends that see men typically marry slightly later than women, and women live longer on average. Andersson points out that this is nothing new in Sweden.

“The basic underlying structures have been the same for a long time. In older farming societies, young people would move out of their parental home but would usually go to work on another farm with other people. So statistics showed them as lodgers rather than living alone, or perhaps the marriage age was younger so you'd move into a marital home – but the idea of moving out and gaining independence was always there historically.”

“The basic patterns are very stable,” he says. The researcher has noticed a growing interest in his studies from researchers and media abroad, including in Asian countries such as South Korea. In contrast to Sweden, he says these countries are actually undergoing demographic changes, with a higher proportion of people choosing to remain unmarried or childless, while in Sweden that proportion has remained roughly the same over the past century.

One of the most comprehensive theses on Swedish individualism was published in 2006 by Lars Trägårdh and Bengt Berggren. Under the provocative title 'Is the Swede a Human Being?' they explore the Swedish model on which the modern welfare state was built. A central idea is that each person should be able to be free from ties to other people, financial or otherwise, so that for example parents are not obliged to support adult children or elderly relatives and women are able to pursue an independent life and career without needing to marry.

The book made waves abroad, turning on its head the idea of Swedes as collaborative socialists, and helps explain why moving out of the parental home is such an important part of growing up in Sweden.

But the analysis by Trägårdh and Bergren didn't show a country where people remained totally unconnected throughout their lives; rather, it was one where all connections were a result of choice, not necessity. In fact, they argued that relationships were made more authentic when there was no interdependence. And while some people in Sweden, as in other countries, choose to spend their lives alone, a larger portion choose not to. Elsewhere in Europe, the age at which young adults leave the parental home is being delayed further and further. In Italy, the majority can expect to live with their parents until the age of 30, one study showed last year. And in the UK, where the vast majority of university students leave home during their studies, there's an emerging 'boomerang generation' of millennials priced out of the housing markers (and saddled with a hefty student debt) and, often reluctantly, returning to lodge with mum and dad once they've graduated.

Sweden is seeing the same trend, with a tough housing market in the largest cities leaving more and more youngsters living at home. But the country's welfare safety net, not to mention high employment levels and high wages, makes it more possible for young people to afford to rent on their own. It remains very unusual for over-25-year-olds to live in the parental home or moving into a shared apartment with friends.

The welfare state also helps the single-household-dwellers who fall outside the two main categories, such as those who find themselves alone after a divorce or bereavement and in other countries might have no choice but to return home or live with friends temporarily.

Many people who are in a relationship live officially at separate addresses. There's a term for this in Swedish, a 'Stockholm marriage', and it's particularly common in the capital where long queues for rent-capped accommodation make it advantageous to hold on to an apartment as long as you can.

If you walk around a Swedish city, you'll notice that the housing itself is different to that of many other European countries. In London, there are townhouses converted into multiple flats, Paris has its imposing Hausmannian buildings, and Rome its 'palazzi'. Because of this, a student or young professional on an average income is more likely to rent a room with flatmates in one of these countries, whereas they would typically rent a small studio in Stockholm, simply because of the accommodation on offer.

This difference is largely because the Nordic countries underwent urbanization later than elsewhere in Europe – industrialization took place in Sweden around a century after it transformed the UK, and before then it had been a much poorer, agricultural nation. The shift happened relatively quickly in the second half of the 19th century, bringing with it a sharp growth in population, which soared from 3.5 to 5.1 million and meant many more homes needed to be built. These were developed with more modern needs in mind, rather than the grand houses built for a different era in Paris or London, which have since been split into apartments.

The fact that it's harder to find a room in a shared apartment than a single household might seem to contradict the idea that people in Sweden live alone out of choice, and leads to the question of what effect the phenomenon has on the individual. Are Swedes leading lonely lives?

It's a concern that's been raised repeatedly, with the Red Cross launching a nationwide campaign to combat loneliness and Statistics Sweden reporting that one in three Swedes over the age of 85 regularly feels lonely. In the documentary film 'The Swedish Theory of Love', Swedish-Italian filmmaker Erik Gandini posed the question of whether Sweden's advance towards modern, autonomous values put human values at risk.

But other data suggests Swedes strike the right balance between independence and socializing. The Swedish word 'ensam' means both 'alone' and 'lonely', but that's not to say that one equates to, or leads to, the other. Many Swedes are active members of clubs or societies, and Swedish socializing often revolves around inviting others into the home – even when that means squeezing into a 30-metre-squared studio – for drinks or dinner, rather than meeting in a pub or bar, something that could foster closer connections.

The World Values Survey reflects this, with 68 percent of Swedes saying they consider friendship a “very important” part of life, compared to only 54 percent in the USA and 51 percent in Germany. Eurostat figures show that 97 percent of Swedes have a friend they can count on when they need help, above the EU-wide average of 93 percent, while they reported the second-highest levels of satisfaction with their friendships.

“It's a myth that a single household means a single lifestyle,” says Andersson. “It's not the same thing; these people aren't necessarily actually single, they still date, have friends, and so on!” The sociologist cites even more studies that look at how much contact people across the world have with non-resident family members. “In Sweden the figure is much higher than in many other cases. You have more freedom but still maintain that contact. Other studies show how much family members help elderly relatives and that's also very high in Sweden – and it's also voluntary, so perhaps of higher quality.”

And for those unconvinced of the merits of living alone, it's worth remembering it's not the only option. The stereotype might be that Swedes are reserved and value their privacy, but collaboration and equality are also Scandinavian catchwords, and it's no surprise that Sweden is home to a booming co-living scene.

In recent years, co-living spots aimed at entrepreneurs or young professionals have gained attention as a way of tackling the housing shortage in Sweden's cities, but they're just the newest iteration of something that's been around for years. In the early 1900s, a set of 'collective houses' aimed primarily at single women were built, the idea being that by sharing household duties, they would have more time for a career, and later in the century, similar properties were set up for elderly residents.

Understanding the various factors behind Sweden's high numbers of single households shows that there's more to the phenomenon than an obsessive focus on independence and privacy.

Going back to Greta Garbo's cry of “I want to be alone”, it's worth noting that the actress complained about the way this statement was used to define her. She later clarified: “I only said, “I want to be let alone! There is all the difference.” But this didn't stop it being cited by her fans, and many international journalists looking for a neat synecdoche for Swedishness.

And just as Garbo can't be summed up by a line spoken by her character, a single statistic doesn't tell a straightforward story about Sweden.

If you enjoyed reading this, you may like these premium articles for Members of The Local:

From The Local's archive. Article first published in 2017.

LONELINESS
Why is Sweden so depressing? The Local answers Google’s questions

PROPERTY
How to buy an apartment in Sweden, step by step
Url copied to clipboard!